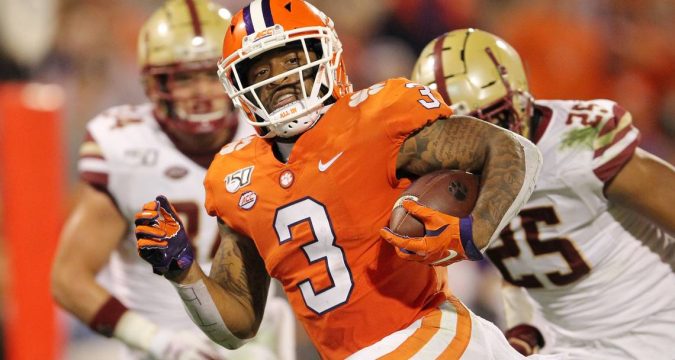 We are less than a month away from the NFL Draft , and while this year was unlike any other in my quest for game film to devour in my constant quest to bring you unpolished possible Pats gems, I improvised, adapted and overcame the obstacles that plague others. Early on in my scouring of this year’s draft class I came across a bit of a wide receiver that stirred up my fetish for route running prowess and YACability (It’s a word ). That Wide Receiver is Clemson Slot Amari Rodgers..

Rodger is the son of former NFL QB and currant WR coach Tee Martin ( Of the Brady Six ) so you know there is that coach’s son’s pedigree that Bill loves so much. Also you can understand why this young man is a disciplined route runner. As his father has coached and helped so many wideouts reach the show. Including JuJu Smith-Schuster, Nelson Agholor, Marqise Lee, Robert Woods and Randall Cobb,  Not too shabby.

But we are here to talk about Tee’s son not Tee so let’s digress shall we. Rodgers is a bit undersized at just 5’10 but has the off the line speed and athleticism to excel at the next level. While watching tape of the young man it was a joy to see him get off the line with a cornucopia of moves and make precise cuts to create space and create the YAC that I so dearly love. He adjusts to misthrows like few players Bill will find in this draft where I think he will fall (the third round) and snatches balls out of the air like a pitcher shocked by a line drive back up the middle.  Now let’s talk about his work ethic . this is a young man who was set to make a name for himself at Clemson entering his JR year, a ACL tear early in spring practice put that on hold but didn’t hold back Amari, who got back on the field just six months after surgery that tells me he is a focused kid who grinds and doesn’t allow any obstacle to keep him from his goals. Hashtag No Days Off.

There is plenty of talk about guys like Jaylon Waddle – Bamma and Rondel Moore – Purdue ( I talked about Moore as a diamond in the rough in the bottom end of the first top of the second on Lock on Patriots ) but this young man could bring a lot of the same production from the slot and on special teams while spending less capitol on draft day. Are there drawbacks in his game ? yes but in the third round you have to expect that, Drops and a lack of a third gear are two of them but those can be overcome with good coaching and further time back from that surgery. In short there are bigger names at WR but i don’t think there is a bigger heart in this draft at this position. Keep an eye out for Rogers name on draft day, no matter where he ends up i believe he will make a very good pro.