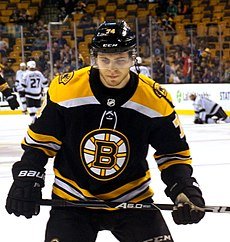 Hey everyone, how is summer going? With the news on anything Bruins being stagnant now, I figured a player profile on Jake DeBrusk was in order. With Jake going into his third season with the team, let’s look back at his first two years here in Boston.

When DeBrusk was drafted 14th overall by the Bruins in the NHL 2015 draft, his stock was on the rise. The left winger was said to be a complete player with a scoring touch to go along with that. The NHL Scouting Bureau had him ranked 19th overall for skaters eligible.

DeBrusk was one of the team’s first round picks that year, which included Jakub Zboril 13th and Zachary Senyshyn 15th. The Bruins got themselves a player who has paid dividends early in his career. I know people like to bring up Barzal, but ask yourself this:  How different would the Bruins look going into 20-21? The answer from my perspective would be much different with the team’s free agents due that year.

When Jake got the call up to Boston, he made an immediate impact, scoring a goal and an assist in a 4-3 victory over Nashville. The young rookie would have a solid first year in the Hub tallying 16 goals and 27 assists, good for 43 points on the season. What really stood out though was his performance in the playoffs that season. The young forward put up a monster series against Toronto including a brilliant goal in a Game 7 win.

The Bruins clearly have something in DeBrusk, whose follow up season saw him increase his goal scoring output to 27 in 68 games. The Bruins would ultimately fall short in Game 7 of the Cup Final versus the St. Louis Blues. I think it is safe to say DeBrusk was seriously hampered by the head shot he took from Nazem Kadri in the first round. When you look at his career, so far he’s trending in the right direction.

With all of this being said, I think he’s going into a crucial year three. With him going into his final year on his rookie contract, look for him to produce at a high level. I don’t always like giving out predictions, but I will in this case:  Give me 30 plus goals for him this year. I feel comfortable in saying that.  Why not? I feel like Jake has the capability of being a consistent 25-30 goal scorer every year.

The Bruins winger needs to show the top brass that he deserves to get a nice bonus for his first three years here. We know the history of this team when it comes to paying young players. With millions at stake, it is in his best interest to have a true breakout season. With Jake solidifying that 2nd line left wing spot, the Bruins can try and fix the right now.

What would be a fair contract for Jake? The team is gonna need to make more decisions in that off-season, but for now let’s just enjoy what we have left for summer. The start of training camp is right around the corner, thankfully. The start of a new season brings hope of capturing the Holy Grail of trophies

I think that just about wraps this up for now. We here at DiehardBostonSportsFans are always thankful for the views of our articles along with our podcast.  Check out our latest podcast episode here