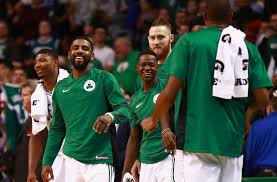 In part two I am going to give my predictions on the Celtics bench.Â  First let me just say we have the most depth and best 2nd unit in the game!

TERRY ROZIER – What can you say about his unbelievable play in the conference finals and all of the playoffs?Â  When Kyrie went down, we all saw what Rozier could do. With Kyrie’s history of injuries we are lucky to have a backup point guard that can jump right in. Terry will see plenty of time, and I think he averages 18-20 minutes a game.Â  We know Scary Terry can come in and light it up some nights.Â  I’d like to see his assists go up running the 2nd unit.Â  I think Terry could average 10 points, 5 assists and 5 rebounds.

MARCUS SMART – I am so glad they re-signed Marcus Smart.Â  He is the heart of this team. He hustles like no other player and as we saw against Cleveland he’s not afraid to be “the fighter”. For Smart I would like to see him stop taking so many 3s. I have a heart attack everytime he shoots from 3. He’s a guy I would like to see get more in the paint, then either finish hard or find the open man. Basically less shooting, more creating. Let’s hope he learned from last season and doesn’t punch anymore windows or frames.

MARCUS MORRIS – Marcus is one to keep an eye on. There were rumblings last year that he wasn’t happy that he wasn’t starting or getting more minutes. He ended up getting those minutes with injuries happening.Â  Will he be content with his minutes this year?Â  Well he came out with BWA (BENCH WITH ATTITUDE) which seems he’s embraced his role off the bench. I see him playing about 18-20 minutes a game. He’s going to have to be the go-to scorer for the 2nd offense so I think he will be fine.

DANIEL THEIS – When we got Daniel no one really knew what to expect from him. We knew he was known for his defense, but before the injury no one knew his offense would come along so quickly. Besides lobs and easy put backs he showed he has a nice jumper.Â  His injury put a stop to seeing him progress more last year, so I’m hoping he can stay healthy and see what else he can do for us.Â  I see Theis playing roughly 15 minutes to start the season. Depending on matchups he could see more or less time.

AARON BAYNES – Baynes will start some games when we want to go big.Â  Baynes is our enforcer inside.Â  He will play most games whether he starts or not, and will average between 10-18 minutes per game.

Let me know if you agree or disagree…

Tomorrow the season is finally here!!!! In part 3 tomorrow, I will give you expectations for the starters including predictions on stats.