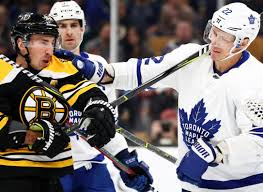 The Bruins deserved a better fate in this one. We all know that, as the Bruins put on a shooting gallery against the Leafs Saturday night in Toronto. These are those frustrating games that seem to pop up during the long season. There was a silver lining to this game though, as the Bruins managed to grab a point after erasing deficits of 2-0 and 3-2 respectively.

The Maple Leafs opened the scoring early in the first on a deflection from Morgan Rielly beating Halak. The Maple Leafs weren’t done though, as they got another one after a horrible shift from Sean Kuraly in the Bruins zone, leading to Dmytro Timashov first goal of his career. The Bruins showed some fight though as Jake DeBrusk got off the snide on a beautiful feed from Charlie Coyle late in the first.

The Bruins drew a penalty that was carried over into the third when Danton Heinen hit twine tying the game up at 2. The Leafs, unfortunately for the Bruins, took the lead again on a Alexander Kerfoot goal in front of Halak on what looked like bad puck luck. The Bruins had some serious chances in this game, and as a fan, it was very frustrating watching. With the Bruins pressing late into the third David Pastrnak tied it at 3-3 sending the teams into overtime.

The overtime session from both teams was back and forth for the most part, but it felt like Toronto carried the play a bit in it. The Maple Leafs ended it on a Morgan Rielly deflection on a Marner blast. With the way they celebrated you would have thought they won a Game 7 against Boston. The Bruins did get secondary scoring in this one with Jake and Danton breaking through.

They need it, as the top line can only do so much going forward. When Cassidy spoke with reporters after the game, he appeared to be pleased with the overall effort from the team. There is gonna be games like this so it is best to ride the wave out. The Bruins will get another crack at Toronto Tuesday night in what will be Tuukka Rask’s 500th game as a player in the league. We should see a team with some energy looking to right the wrong that was Saturday night in Toronto.

We will see if the Bruins decide on bring up a player from Providence as Kuhlman got dinged up while playing a little over 9 minutes in this game. There are certainly players who will get a look if they go that direction Bjork, Cehlarik being the two likely candidates. Those decisions are for the brass to make –  not for someone writing this article for you. The Bruins are ok still with a 5-1-2 record. Going forward they will figure out the pieces.  Still questions remain with a few players here, but in Bruce we trust!