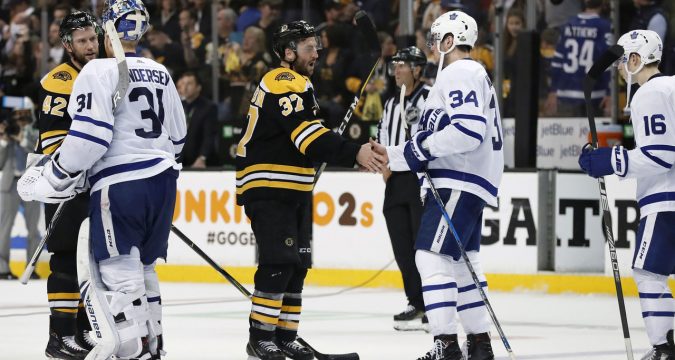 The Bruins will be looking to get back into the win column tonight as they meet up with an old foe, Toronto Maple Leafs. The two teams obviously know each other well, but tonight will be another test for both teams looking to secure points in what will be a hotly contested Atlantic Division battle.

The Leafs will be without John Tavares due to a broken finger he sustained against Washington. The Leafs have other weapons however, so the Bruins will need a full 60 minutes in this game. The Bruins have injuries of their own that they’re dealing with right now. Second line center David Krejci and Joakim Nordstrom are both out of the lineup. The loss of Krejci is really glaring right now, as the only line who has it going is the Bergeron line. Bergeron, who is dealing with a ailment of his own currently, traveled with the team should be good to go.

The Bruins need to ride the ship until healthy bodies are back, or the make a move via Providence. The name we keep hearing about is Anders Bjork. We have seen a sample of what he can bring to the table. The Bruins however wanna keep him on the left wing going forward, so where do you put him? Would Bruce put DeBrusk on the third line with Heinen slotting to the right side?

We all have seen the tape on how Jake is performing at the moment. Don’t get me wrong: I love Jake, but we gotta see some results here from him. I don’t want to turn this into one big negative piece for obvious reasons, but the other lines need to get it going. The Bruins could use a shakeup with their lines right now in my opinion, but unlike other people I have seen suggest, I have zero interest in touching that first line right now. The season is young still, and I trust Bruce will do what he feels is right. After al,l he knows more about his team then us.

The Bruins aren’t in a terrible place right now despite the lack of secondary scoring. They currently stand in second place in the Atlantic behind surprise team Buffalo. Who saw that coming anyone? The main point is the sky isn’t falling yet. There is cause for concern sure, but every team has something going on right now. What do you want to see from this team early on? What I want to see is consistent play from them with no 2nd period lulls. The arena will be electric tonight in Toronto before the two hook up again in Boston on Monday night.

The Bruins will be starting Halak in net tonight, who has played awesome thus far in the season. The Bruins have a legitimate goalie pair in Rask/Halak. Those of us old enough to remember Moog/Lemelin can see the similarities between the two. The importance of Halak should not be taken for granted at all. What he brings to the table, not just on the ice, but for Rask as a whole, is huge for this organization. They could use another stellar performance from him with the Bruins struggling right now, minus the top line.

The Bruins will figure it out that I am sure of, and if not they will do something about it. We can go on about side stories for awhile now, but it is the weekend. Enjoy it! The Bruins will be on the air tonight and that is a good thing.

Let us all pull together in support of other writers and podcasters here. The Bruins are one big family, so let’s act like it!