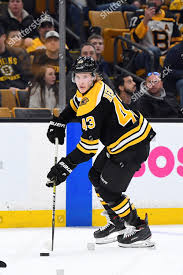 Heinen is back in the fold

The Bruins announced late Tuesday night that they came to terms with forward Danton Heinen. The signing brings one of the team’s restricted free agents back into the fold. The terms of the deal are 2 years, at $2.8M per year, thus avoiding arbitration with the team that was slated for August 3rd.

When you look at the deal, the Bruins made out OK on it.Â  People expect goals and assist rightfully so, but Heinen is one of the team’s better two-way players on the Bruins roster. The man’s stats don’t jump out at you.Â  Last season he had 11 goals with 23 helpers, good for 34 points with a plus 13 in the +/- department.

Danton has proven to coach Cassidy he can be used up and down the lineup in his early career. When Pasta was out for a extended stay he filled in nicely on that top line. I know we all feel anybody can go on that line and produce, but they chose Heinen for a reason.

More Work To Be Done

The Bruins however still have work ahead of them with their other restricted players Charlie McAvoy and Brandon Carlo. The signing of Heinen brings the Bruins cap space to $8.1M,Â  not nearly enough to get them into the fold.Â  They will need to make some sort of a move here to free up some money.

There have been names thrown out, from Krug to Backes and even Krejci.Â  “You know who you are.” I can sit here and speculate on the player, but I won’t be doing that in this article.Â  I will sit back and allow Don to do what he feels are the right moves. We already have enough armchair GMs out there, don’t we?

With the weather finally being good out there go to the beach, do the cookout and let the chips fall where they may. We all know we’ll be back next season ready to go with this team. I know criticism is part of being a fan, but let’s all see what they have going into camp and at least enjoy the summer before the grind of the season is upon us.