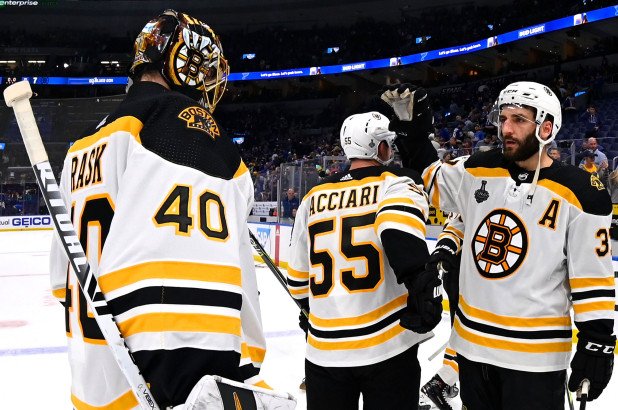 Well that was something wasn’t it? I know I wasn’t expecting a 7-2 shellacking, but that is exactly what we saw last night in St Louis. The Bruins made a statement in this best of 7 series winning a pivotal game 3.
With so much talk about the Bruins top line not producing they answered the call last night. What has become somewhat of a trend this playoff run starting series out they really get it going in the middle part of it.

How important is the top line to the Bruins? The easy and most obvious answer is very. They put on a show last night combing for 5 points between them. This is great news if you’re a Bruins fan very bad if you’re not. When they get it going it becomes a trickle-down effect, but give credit where it is due for the bottom six players on this team.

The line of Coyle, Johannson, Heinen has been in my mind the best line in the series. How did they do last night you ask? How about 5 points as well and a pretty goal from Coyle on a feed from Mojo. The goal gave the Bruins a 2-0 lead. There has been so much talk about Danton Heinen this year for lack of scoring among other things. What should be talked about is just how solid he has been in the department that doesn’t show up on the stat sheet. The man is involved with that line very much so.

While I am on the subject of the grinders how about the play of Joakim Nordstrom? The much maligned player has been doing it all this postseason. The block shots from game 2, and his penalty kill effort, he’s doing what it takes to win. The 4th line has been making a impact all season not just this playoffs.

Firing on all cylinders

What was once considered a largely one line team is now a well oiled machine across the board. The one exception would be the Krejci line who have been pretty quiet this series.Â  Maybe that will change Monday night in game 4.Â  This team is proving again just how resilient they truly are. They lose Matt Gryelcyk possibly for the remainder of the playoffs, but insert John Moore.Â  Moore hasn’t seen much ice time this playoffs, but he was pretty good in game 3.Â

This team just continues to get it done no matter what they face. They lost Charlie McAvoy for game one of the Conference finals, but no problem insert Steve Kampfer.Â  I could keep going on about this team, but they still gotta get 2 more wins before they can truly become special.

The next game is gonna be huge for both teams of course. The Blues don’t wanna find themselves down 3-1 headed back to Boston. The Bruins on the other hand are gonna want to put this series in a stranglehold. I feel like with this teams leadership despite Patrick Maroon calling it out ( I still can’t believe that) will not allow this team to overlook what is at stake here.

The big question for me going forward is the mental game for how does Binnington.Â  He was pretty shaky in game 3, can he bounce back in game 4?Â  The goalie has played great in his time with the Blues there is no denying that. I just wonder if the Bruins are in his head now. I don’t know for sure just a question on my end. We will soon find our answer on that though.

I like what the Bruins team does in all facets of the game though. The special teams have been great across the board. When you make teams pay for infractions on the ice it becomes a serious weapon for you. The Bruins make you pay on the pk as well. There isn’t many holes in this team overall.

This team is now 2 wins away from hoisting Lord Stanley. I think I can say Bruins fans are ready for another cup it has been 8 years since its last one. They know what it takes to get it done now just go out and do it men. Let’s Go, Bruins! WE WANT THE CUP!