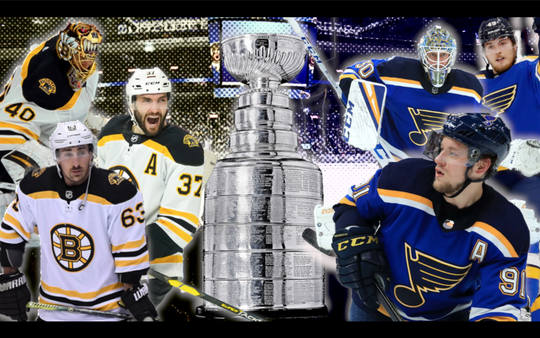 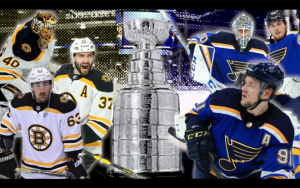 This layoff has been as brutal as sitting in a dentist chair, but we’ve waited 6 years for this moment; a few more days won’t kill us. I say that now with cup fever at a boiling point in the region. When the playoffs started who had these teams in the cup finals? The so called experts didn’t expect this, I don’t believe most people thought it would be this match-up.  Embrace it.

When these teams meet up Monday night in Boston the start of the most coveted prize begins. The cup is something that can make you go down in folklore, but you will pay a heavy price both mentally, and physically along the way. The Bruins are ready for this one. The core is still here along with a youth movement, and this team is firing on all cylinders at the right time.

Going To Be A Battle

That doesn’t mean the Blues will just lay down in this series. They are good, and very deep in all facets of the game. They have a stout back-end who will no doubt challenge the Bruins’ mettle along the way. I like to call them Bruins West with all the similarities between the two.  It could very well come down to a bounce here or there. What will be very telling is how these two teams come out Monday night with all the rest in between games.

I have hated the wait, but also gotten the chance to reflect on the season so far. This team certainly didn’t make a good impression out of the gate losing 7-0 to Washington. That is a very distant memory now though isn’t it? This team kept plugging along, getting contributions across the board. What makes this Bruins team so good is their composure and determination.  Seems like nothing affects these guys.

What a breath of fresh air this team has been along the way. Whatever Bruce is selling they have bought in. This cup run has been impressive in so many ways that it would take me hours just to get to everything, I will however point out the play of a few players however. There is no way we can’t give Rask his due here: 12-5 with a 1.84GAA along with .942 Sv%

Tuukka Rask Has Been Amazing

The time has come people rally behind the man. I know people are still gonna say he needs to win Stanley. The man has been absolute money in these playoffs.  Not even a debate so don’t bother trying. I think the people who know me will tell you I call it like it is. I have just been blown away by him this post season.

The other player who has really caught my eye is Carlo.  Talk about rising stock. The man has been on a mission this year. and just been a shutdown player on that second D unit. We all saw his play on Panarin that led to the gwg against Columbus. That play alone summarizes what he is capable of.  Expect more of that going forward.

This team is a perfect blend of vets/youth all wrapped into one. Who would have thought the Bruins would be 4 wins away from hoisting the Holy Grail? I can’t wait for puck drop. I believe my wife will be happy, so she won’t hear me be griping about the days. The Bruins have a task in front of them with a team just as hungry as them standing in the way.

The key to the series will be match their physicality. The Blues are thumpers, but the good news is so are the Bruins. The goalie matchup is gonna be a good one with Rask vs Binnington. I think overall though the Bruins are the deeper team and will ultimately prevail. I always say “expect the unexpected”, in the playoffs this will be no different.

The difference in my opinion is the Bruins forwards are deep across the board. We all know about the top line how dangerous they can be, but the Coyle line has some good mojo going right now. I certainly can’t forget the Krejci line along with one of the best 4th lines in hockey. This team has what it takes to win it all.

I don’t wanna come out and say the Bruins will just steamroll them, I don’t see that happening.  In fact I believe it’s gonna be a long series. With all that being said I like the Bruins in six. I said Bruins in 7 during our podcast this week, but I have had a change of heart; it happens.

That is it everyone.  Let’s Go, Bruins!  Bring Stanley home where it belongs.   “We want the cup”