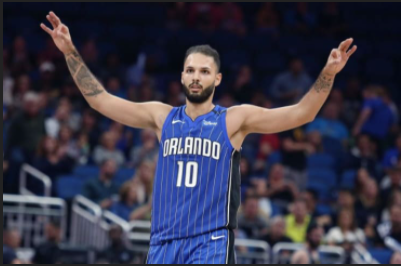 The Boston Celtics went into Thursday’s trade deadline looking to add some depth, and fans seemed to have their hearts on Aaron Gordon or Nikola Vucevic, but they will have to settle with Evan Fournier. Boston traded point guard Jeff Teague and two future second-round draft picks to the Orlando Magic in exchange for the veteran, who is averaging career-highs of 19 points and 3.7 assists per game this season. Acquiring Fournier is significant and a good lift for the team immediately. “I think his experience will help,” Ainge said of Fournier Friday morning. “His skills, his versatility – a 6-foot-7 guy who can handle the ball, he could play some 1, he could play some 2, he could play some 3, he can play in lineups that switch 1-4 or 1-5. I think he brings a lot of versatility and he’s an added offensive weapon for Brad (Stevens) to use, and it alleviates some of the pressure on Jaylen (Brown) and Jayson (Tatum) and Kemba (Walker) to have to create so much.” The French wing brings a well-rounded skill set, he can score at three levels, and will really help with spacing on the floor. His ability to drive the ball should benefit the Celtics greatly. This season, he has 4.7 trips to the free throw line per game. That is a lot more than any Celtics player this year. Granted, his numbers may drop a bit coming to Boston from a weak team, but he is an NBA quality starter. They have plenty of room for improvement, and will look to improve on their 8th seed.

Danny Ainge also dealt Daniel Theis and Javonte Green to the Chicago Bulls as part of a three-team trade with the Washington Wizards. In return, the Celtics landed center Moritz “Moe” Wagner from Washington, along with 7-foot-2 big man Luke Kornet from the Bulls. Wagner, in his third NBA season, is averaging 7.1 points, 2.4 rebounds, and 1.3 assists per game, while playing 15.0 minutes per contest. On a per-36-minute basis, those numbers average out to 17 points, 7 rebounds, and 3 assists. If the 6’11” Wagner wasn’t enough, Boston also picked up 7’2” Luke Kornet, who was also acquired in the Theis deal. The 4-year veteran provides a solid rim-protection presence.

It wasn’t the fireworks that many wanted to see, but we got better. Now we turn to the buy-out market!