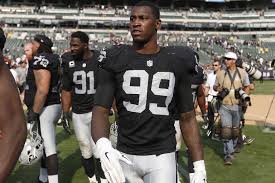 In the History of the NFL there may never be a signing as disgusting as This one people , yes aldon smith late of the 49’ers late of the Raiders is now a Cowboy, pending reinstatement by NFL commissioner Roger Baddell, i wont get into all of the disgusting things Roger and Jerry Jones have done over the years as i don’t get paid by the word. But here are all Of Aldon Smith’s Stats

On January 28, 2012, Smith was arrested for driving under the influence in Miami Beach FLA]

On June 30, 2012, Smith was believed to have suffered stab wounds when attempting to break up a fight at a party at his Santa Clara county residence. Two other people were shot in the incident. On October 9, 2013, Smith was charged with “three felony counts of illegal possession of an assault weapon” relating to the stabbing incident. The charges were later reduced to misdemeanors.

On September 20, 2013, Smith was involved in a single-vehicle accident in San Jose, California. He was subsequently arrested on suspicion of driving under the influence and possession of marijuana. After the loss to the Indianapolis Colts in the third week of the football season, he voluntarily entered a rehabilitation facility, to be put onto the non-football injury list with an indefinite leave of absence.

On April 13, 2014, Smith was detained and arrested following an incident at LAX in which Smith became belligerent and uncooperative with a TSA agent, who alleged Smith claimed he was carrying a bomb. After interviews revealed that Smith did not clearly state he was carrying a bomb, the Los Angeles City Attorney decided to drop the charges. Smith was suspended for nine games for the 2014 season.

On August 6, 2015, Smith was arrested in Santa Clara, California, for an alleged hit and run after driving under the influence, and vandalism charges. He was released by the 49ers the next day as a result.

On March 9, 2017, Smith was a passenger with a friend driving to Smith’s house at 12:00 AM, when the San Francisco police department found out both Smith and the driver were under the influence. Even though Smith was not the driver, both Smith and his friend were detained by the San Francisco Police Department for questioning. The next day, Smith and his friend were released. No arrests were made.

On September 23, 2017, it was announced that Smith had agreed to Plead No contest to Hit and Run in the 2015 incident in exchange for the DUI charges being dropped. He was sentenced to 20 days in jail. During his sentence, he was ordered to attend a treatment facility, and undergo anger management classes. After his release, he was disallowed from entering any bars or other establishments where alcohol is the primary commodity being sold.

On March 3, 2018, someone called the police from Smith’s home and reported that he had consumed multiple bottles of tequila and then bit her wrists. Smith reportedly fled the home before police arrived. San Francisco police did not comment on the specifics but did state that domestic violence of a “non-lethal” nature had occurred and they were seeking out Smith for questioning about the incident.

On March 23, 2018, Smith was arrested for violation of court order, where he was ordered to stay away from a woman he assaulted earlier in the month. The woman was revealed to be Smith’s fiance. This picked up from a previous incident that occurred on March 3, where Smith pleaded not guilty on four misdemeanor counts, including domestic violence, assault with force likely to produce great bodily injury, false imprisonment, and vandalism. On April 8, 2018, Smith was arrested for violations of conditions to his bail.

On June 10, 2019, Smith was stopped by police in Mission, Kansas for a traffic violation and later arrested on suspicion of driving under the influence.

WHAT THE EVER LOVING FUCK JONES , I swear to Christ if Aaron Hernandez had gotten off someone in this league would have signed him,