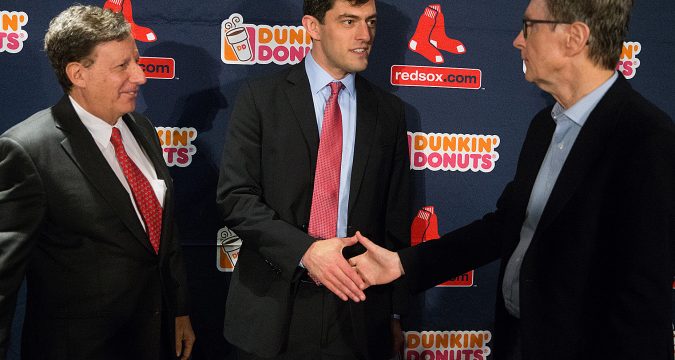 As I sit back awaiting the â€˜punishmentâ€™ thatâ€™s set to be dished out to the Red Sox before the weekend, I canâ€™t help but reminisce on just how crazy of an off-season itâ€™s been thus far. Being a Boston Diehard Sports fan base, Iâ€™m sure youâ€™re all well aware of whatâ€™s transpired, but letâ€™s quickly recap anyways.

It all started when the Red Sox hired a new GM, with the daunting task of getting the team under the luxury tax threshold, while still keeping the team competitive. By no means is that an easy thing to tackle. Coming into the job, Chaim Bloom knew he would more than likely have to trade a franchise player, and a fan favorite or two to make this possible. Not a fun thing to look forward to, and something not many are cut out to do in a market like Boston.

Next in the chain of events, manager Alex Cora was fired in anticipation of a similar punishment to that of the Houston Astros manager and GM. But as details continued to unfold, it appears the Sox may have jumped the gun on canning their skipper, because the team has yet to receive any penalties from the commissioner; though weâ€™re told weâ€™ll finally get some answers before Friday of this week. Nonetheless, VERY late into an off-season, the Boston Red Soxâ€¦the same Boston Red Sox who were World Champions just two seasons agoâ€¦were set to begin the year without a leader in the clubhouse.

Then the inevitable happened. All Star and former AL MVP Mookie Betts, along with veteran southpaw, David Price, were sent to the LA Dodgers in a three-team deal with the Minnesota Twins, with the Sox set to receive a package of Alex Verdugo and Brusdar Graterol, and Kenta Maeda headed to the Twin Cities.

But then they werenâ€™tâ€¦ After a physical from the then Twins flame-throwing prospect set off some red flags with Bostonâ€™s front office, the deal was put on hold. Boston wanted another prospect or more money from Minnesota, to which they said â€˜thanks, but no thanks.â€™ And understandably so; the Twins were under the impression that parting with Brusdar would land them a proven starter in Maeda, who has shows signs of excellence out of the pen, as well, which is crucial come playoff time. Perfect for a team who made a splash in free agency this offseason, to improve a highly successful club from just a season prior, with the main core of the roster returning in 2020.

Fast forward a few daysâ€¦a few very long daysâ€¦ Mookie and Price, and now also Brusdar, are headed to LA, with Maeda still going back to Minnesota; only this time the Sox would receive Verdugo, and prospects Jeter Downs (INF) and Connor Wong (C/INF). This all taking place two weeks prior to the first game set to kick off Spring Training. At this time, the Red Sox are still without a manger.

Though I do have a ton to say about the deal itself, the shortened version is this, the Red Sox needed to get below the tax threshold to avoid paying a major penalty. Yes. Do I understand why the move was made? Yes, especially for being able to include half of Priceâ€™s monstrous contract. Do I agree with trading the second-best player in baseball for a young outfielder with some promise, but also a bad back and potential issues off the field, along with a couple prospects who we may or may not see this year, or even next year? No not at all. Especially when the team owner is a multi-billionaire. However, a lot of the blame for not being able to pay Mookie Betts falls on Dave Dombrowski for giving Sale a massive extension at a time when it wasnâ€™t necessarily a priority. As well as the Sox for paying JBJ $11 million in arbitration, for someone who frankly has a great defensive presence but has never had a consistent or productive bat in his career. Questionable prior decisions forced Chaimâ€™s hand, and ultimately, he did what he felt he needed to do, in order to get a return for Mookie, instead of him possibly walking away for nothing other than a compensatory draft pick. Nonetheless, we can only wait and see how this blockbuster will play out. For now, letâ€™s continue to move forward.

Ron Roenicke, who spent time in Boston as a coach in 2018 and 2019, was named the interim manager as pitchers and catchers were reporting to Spring Training. This is actually one of the few things I like from this offseason. Ron has been around this team and already has a relationship with a majority of these guys. Plus heâ€™s had experience running a spring camp, which usually falls on assistant coaches anyways. What I like about Roenicke is that heâ€™s laid back, similar to Cora in a sense, where he just letâ€™s the guys go out and show what they can do. And for a team thatâ€™s expected a third-place finish in the AL East alone, that could potentially be a deadly recipe should all other things with this team fall into place.

Another one of the few things Iâ€™ve enjoyed this offseason is the signing of Kevin Pillar. A guy with AL East experience and a tremendous glove and speed in the outfield, the Red Sox get a guy who will step right in and contribute. Though JBJ is a slightly better defensive outfielder, Pillar holds a slight edge in offensive production. And Pillar is excited to be here, which is a great start!

Next, the newest member of the Red Sox, and ultimately the replacement for Mookie Betts, Alex Verdugo, is introduced to the team as wearing number 12. Now this was crushingâ€¦ With such an emotional and frustrating offseason for Sox fans, there was hope that with newly acquired money that was shed in Mookie and Priceâ€™s contracts, the team would at least bring back a fan favorite in Brock Holt (at the time was still unsigned), in a effort to make up for some of the heartbreak in parting with an MVP. But thereâ€™s a problemâ€¦ Brock Holt wore number 12.

BUT, then Verdugo announced that heâ€™d be wearing number 99 in the coming season, and fans were all but certain that meant that the Brockstar (and Griff) would announce a return to Bostonâ€¦until he signed a one year deal with the Brew Crewâ€¦just crushing our hearts a little more.

Oh but weâ€™re not doneâ€¦ reports have come out that the Red Sox are still in contact with the San Diego Padres about a deal centered around 1B/OF Wil Myers, who has a horrible contract. The upside being that San Diego has pitching prospects that are, or are very close to, MLB ready; which is a clear need for the Sox right now. But, taking on a bad contract seems to be the opposite direction the Sox want to be going in right now. And with the Pillar signing, that would leave the Red Sox with almost TOO much depth in the outfield. The only way I can see a deal with San Diego getting done is if JBJ is included to drop the $11 million from the payroll to make Myersâ€™ contract fit without again exceeding the tax threshold. The Sox seem to have a liking in Cal Quantrill, who could fill out the back end of the rotation for the coming season, and does have an upside of a potential strong 3rd or 4th SP if all things pan out. Keep in mind, the Padres were the other team the Sox were attempting to deal Mookie to, so Iâ€™m not sure JBJ alone will get the job done, but time will tell. Thereâ€™s no guarantee a deal even gets done at all.

With an off-season already filled with heartbreak, high emotions, and major changes, we may not have even seen the last of things yet. For now, we wait, first to see the punishment handed out by the commissioner, and also, what else Chaim Bloom has up his sleeve. I canâ€™t yet give a final grade on the off-season or this yearâ€™s team until all is said and done, and the first pitch is thrown opening day. Iâ€™ll stay locked in and get you my takes as soon as possible, but for now, follow me on Twitter @MikeyT913 where Iâ€™ll be able to get info out quicker than most blog posts. Iâ€™m excited to be a part of the Red Sox coverage with Diehard Boston Sports, and I canâ€™t wait to see where this journey takes us. Baseball is back, everybody.

3 thoughts on “Current State of the Boston Red Sox”