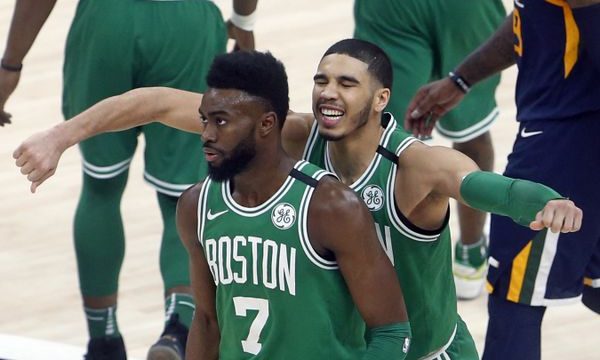 Well after a horrible season last year that started out with high expectations, we will enter this season with fewer expectations and a more fun team. With the subtractions of a lot of players from last year’s team and a slew of rookies to go with Kemba Walker, Enes Kanter, and Vincent Poirier, we shall see how this year turns out. One thing is for sure, Ainge believes in this Celtics core!

Gordon Hayward looks to have a bounce back year with a full offseason to improve. With Hayward having a not so good year last year one NBA executive called about getting Hayward for cheap, seeing they lost Kyrie Irving. Well, Danny supposedly shut that down quickly. Obviously the C’s expect big things from him this year.

Speaking of Danny shutting down NBA executives, one executive said the Celtics’ asking price for Jayson Tatum was astronomical.Â  As it should be.Â  Tatum looks to be the center of the franchise.

Another executive was also shut down when inquiring about Jaylen Brown. He said as soon as Jay came out of his mouth Danny said neither Jayson or Jaylen is available.

Hearing all this makes me think “what if we could have cleared Hayward’s contract?” We will see how this team does this year but it’s been made clear Tatum and Jaylen along with Hayward and Kemba are the future, and Danny likes what he sees.

I for one cannot wait for this season to begin. Is it October yet? Go C’sðŸ€ …and as always you can find me on twitter @JessicaSneeÂ  . Listen to the latest episode of the boston sports blitz below!

2 thoughts on “Danny believes in this Celtics core”