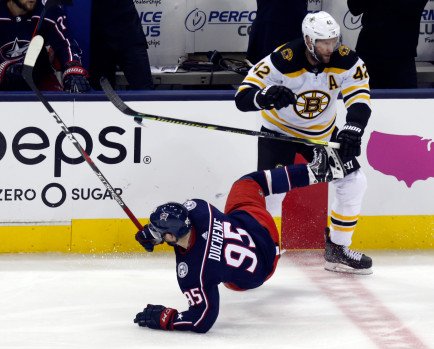 With the Bruins getting set for the Stanley Cup showdown I wanted to touch on number 42, David Backes. The once-Blues captain will face off against his old team for the right to hoist Stanley. I would imagine he will say “business as usual” as that is the type of player he is after all.

When Backes signed his 5 year 30 million dollar deal July 1, 2016 we were getting what a lot of people were thinking a Bruins type player. The man has always played a hardnosed style that always endears Bruins fans. Did the money make sense? Probably not, but I don’t sign the checks.

The player we thought we were getting has shown up at exactly the right time for the Bruins. What he brings to an already stacked veteran core canâ€™t be taught. The man is playing with a purpose, doing all the little things that he has done his entire career. Â We know he’s not in his prime anymore, but you can’t teach heart.

What I love about him is he has just accepted his role on this team. When he was re-inserted into the lineup during the Columbus series the team started to take off. I know it isn’t just him obviously, but he has been both vocal on and off the ice. The man is always willing to do what is necessary for a win.

The cup is winning by doing the dirty things to win. I know you need your big stars to shine, but role players play a huge part in that as well. When you ask former coaches or players they will tell you the same thing: team effort. When you watch him play just watch how he handles himself on the ice. The little things add up whether it is standing in front of the net, or sticking up for your teammates. Â He does it.

There is so much stat watching that we often forget about the players who just do their job out there. I am almost certain he will make an impact in this series in some form. The score sheet might say zeroes for him, but he will make his presence felt. I am very much looking forward to this series especially seeing David play for the Cup his first time.

How can you not root for a guy like that? I think he epitomizes what a Bruin is: lunch pail, hardworking player, do the job go home. I really hope the Bruins can finish this quest for obvious reason, but seeing him lift the Cup would be special.

The man is very active with animal welfare. In November of 2013 his wife and him started Athletes for Animals. Check that out. I can get behind something like that whether he was here or not. I have never meet the man, but he sounds like a stand-up person.

The rest is up to you Bruins. We can all root for you, but execution is the name of the game. I think you can do it along with the rest of us fans. When you go out there trying to win Stanley win for each other, but Win it for Backes!