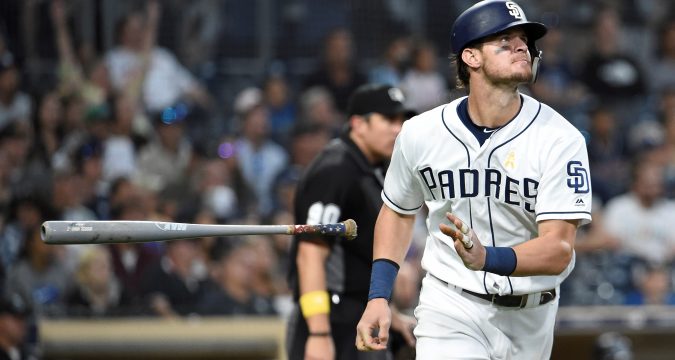 As things currently stand, the Boston Red Sox set to roll out the following players on Opening Day:

*-Not sure if these players will start the season in MLB or the minors just yet.

That being said, thereâ€™s talks that the Sox have stayed in contact with the San Diego Padres regarding a deal centered around 1B/OF Wil Myers. The purpose of the deal would be for Boston to assume roughly half of the remaining money owed to Myers whoâ€™s guaranteed $61 million over the next three years, similar to the deal that sent Price to LA.

There are a few things that are a bit strange about this potential deal. First and foremost, bringing Myers to Boston would crowd the outfield; they currently have Benny, JBJ, Pillar, and Verdugo when he returns from injury, plus JD being able to hop into right field every now and then to give guys some rest. Myers almost isnâ€™t needed at all, especially for a guy whoâ€™s seen his offensive production drop every year since his breakout rookie campaign whoâ€™s owed a ton of money. Which brings me to my next point.

The Red Sox are clearly trying to remain below the luxury tax threshold to reset it for next season and avoid paying some massive penalties; taking on Myersâ€™ contract (even if itâ€™s only half) would basically offset the deal that ultimately brought the team below it.

The next reason this deal seems strange to me is that it was originally proposed when the Red Sox were trying to deal Mookie Betts, who is no longer on the roster. Although San Diego does have a large number of enticing prospects, the amount or quality of prospects that would be coming back to Boston in a potential deal would not nearly be as good as it would have been if Mookie was the one being sent to the Friars. So, that brings me to my last question.

Who would the Sox send the Pads in a Wil Myers deal?

Well for starters, who WONâ€™T they send? Benny just signed a new deal, so the likelihood of him being moved is minimal. Bogaerts and Devers arenâ€™t going anywhere. Moreland signed a deal to remain in Boston in lieu of signing a deal with a new team at this point in his career, so he wouldnâ€™t make sense either; plus, the Sox have him for fairly cheap. Chavis has shown too much promise and moving young affordable players isnâ€™t the direction the Sox are moving right now. Vasquez is coming off a sensational season and the Sox depth at his position wouldnâ€™t allow them to move him. J.D. wouldnâ€™t serve the Padres much use because heâ€™s not an everyday outfielder and the NL doesnâ€™t have a DH yet. Pillar just signed here and seems excited to be a part of the club, plus heâ€™s another guy who they have for fairly cheap, so he wonâ€™t be going anywhere either. Verdugo, though hurt, was the centerpiece of the Mookie deal; Iâ€™d say itâ€™s safe to say heâ€™s staying put.

The Red Sox donâ€™t even have a 5th SP right now unless you consider Brian Johnson being the man for that job (I hope thatâ€™s not the case), so none of the SPâ€™s likely will be going anywhere. Aside from Workman having a great year in 2019, the Red Sox bullpen was problematic; extracting someone, instead of adding someone, to that mix makes little sense either.

In my opinion, that only leaves ONE option: Jackie Bradley Jr. The CF who was awarded $11 million in arbitration (ridiculous for a guy who only plays well in the field), seems like the most likely candidate for a few reasons. First, getting rid of his $11 million would make it far easier to take on half of Myersâ€™ contract while remaining below the tax threshold. Second, he would immediately step into the Padres outfield to fill Myersâ€™ spot in the lineup (Pads also dealt Margot to TB this offseason). Lastly, if the Friars can somehow figure out how to get JBJ to hit even .275 (career .236), heâ€™s still young enough and good enough defensively to turn into an All Star-caliber player.

Aside from Myers, who would the Red Sox be getting in return? The team was linked to starters Joey Lucchesi and Cal Quantrill, along with position players Luis Campusano and Gabriel Arias, when they were discussing a deal centered around Mookie. They obviously wonâ€™t be getting all four guys, maybe not even three, unless something else is sent along with JBJ. Personally, I like the upside of Lucchesi far more than that of Quantrill; but because itâ€™d be JBJ and not Mookie going back, Iâ€™m not sure the Padres would consider dealing Lucchesi in this scenario. Ultimately, I can see a deal like this getting done:

Where things get tricky is the Padres desire to try and swing a deal for OF Nick Senzel from the Cincinnati Reds. Theyâ€™ve also been heavily linked to the Indians SS Francisco Lindor, but Cleveland seems adamant in heading into the season with him as the starting shortstop. However, if the ultimate goal is Senzel to the Padres, there is a chance of three-team swap between Bos, SD, and Cin; but that would drastically change the possible deal I just mentioned above. And then thereâ€™s the obvious chance that no deal gets done at all. But the fact that the Sox are even still discussing this potential trade after dealing Betts shows that thereâ€™s an obvious desire from our front office to obtain SOMEONE other than Myers on the Padres roster. For now, itâ€™s nothing; but definitely worth keeping a close eye on.