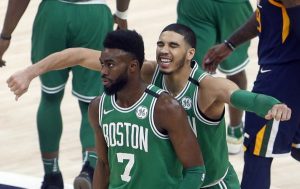 Tonight the Boston Celtics take on the Washington Wizards and look to win nine straight against a familiar foe as Isaiah Thomas returns to TD Garden in Boston tonight. He recently was added to the starting lineup with John Wall out for the year. We should see a lot of him this game. How can you not root for him? This guy gave us his all – blood, sweat, and tears.Â  Literally!! He’s had some injury issues since leaving the Celtics. This is his first real chance again. I for one hope this kid balls out tonight. I obviously want the Celtics to win, but he can go for 40. I hope he does and I hope the fans show their love for him tonight. We should celebrate him, what he did in the playoffs after his sister died, knocked out teeth, everything. This man was and always will be a Celtic.

Let me get the same opportunity and Iâ€™ll do that shit again https://t.co/pm41wSEAh0

What a start to the season so far. After losing the opener we are on an 8-game win streak, number one in the NBA. Its early and I’m not all in just yet. But what a difference a year makes. This team is fun, they enjoy playing with each other, and you can tell it’s just a different vibe. Gordon Hayward broke his hand and has had surgery and will be out 6 weeks.The timing is unfortunate as Gordon was on a tear. He looked explosive again. His injury will give more time for Javonte Green, Carson Edwards, and Romeo Langford. I’d rather this happen now, to give the young guys some minutes and let them grow in the NBA. This could benefit us in the long run. Best wishes for Hayward in his recovery.

One last thing:Â  MAN, has Robert Williams improved! This kid has impressed me a lot early in the season! He’s only going to get better. Timelord has arrived!!

Give Robert Williams all the minutes. Timelord went off for 16 PTS & 16 REB ðŸ•°ðŸ‘‘ #Celtics pic.twitter.com/ldiRtghPe2

As always you can find me on twitter at â€“ @JessicaSnee

You can find our latest podcast episode here: https://pod.co/boston-sports-blitz/11-11-19-bruins-are-in-a-funk-celtics-red-hot-start-to-the-season