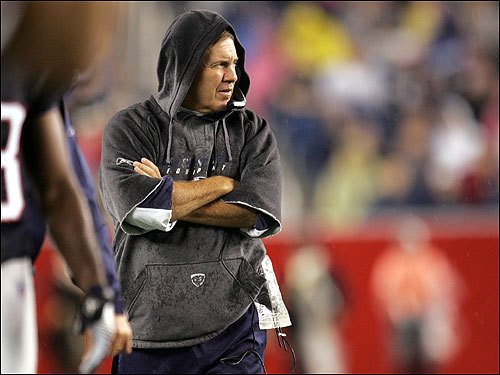 Monster Keys to the Patriots Draft

Study time is over, it’s SAT week for the draft junkies One thing we all need to remember (trust me, many forget)  is that these tests don’t get graded for at least three years. So be kind to those of us you’ve been reading and ripping into over the past few weeks and well into the 2020-2021-2022 seasons.   “Hey Dick Head Remember when you said to draft…” This season has been harder than most to gauge what any team may do and when you are scouting for the Pats you can turn that Amp up to eleven. And no, I don’t mean me – my drafts are flawless, rip away.  Remember, Bill will move up down in and out of rounds trying to max out every angle he can so use the numbers here as guidelines – not as gospel.

Cesar Ruiz IOL Michigan
GO BLUE , I know there are gaping holes that need to be dealt with on the other side of the ball right now – holes that always look bigger than the O-LINE, but with contract negotiations stalled on Joe Thuney, Bill needs this pick to shore up a contract aged line and Ruiz is the man to do it. He can play anywhere along the interior, has great base blocking technique and pulls crisply in either direction. Ruiz is a can’t miss selection in a draft Bill can’t miss on

Addam Troutman TE Dayton
Other names have been bandied about by people much better than I, but I feel really confident in this man at this point. Troutman climbs the entire tree and does it with a 6’5 frame. This is not a puny human.  He’s an above average blocker, is quick enough to be used running crossers – busting up seams – can be flexed out into space. If he is there Bill needs to make this move.

Jake Fromm: QB Georgia
When I mention Fromm out there in the world I get two reactions.

“Murph you fucking genius” or “Dumbass”. Let’s go with the former shall we? Listen Fromm isn’t a WOW QB. You watch his film from 2019 and at times it’s unimpressive. You go back to 2018 however and you see what this kid can do with Talent and Time. From is talented (enough) has arm strength (enough) to succeed at the next level alone, but he has an IQ that’s (more than enough) when looking across the line of scrimmage. Reads through progressions like a vet and doesnt lie to himself. He knows his limitations and works to his strengths.

Troy Dye LB Oregon
Sideline to sideline you won’t find a better Linebacker at this stage of the draft. And he gets downhill in the blink of an eye. This kid is a run stuffer and with time will grow into a 3 down player. He has the size, speed and Moxi to be an impact player in any scheme. The Patriots could do a lot worse than this young man. Bill will put him in the right position to reach his potential. Mid way through his rookie year you will be asking why not more Dye?

Rd 4 Pick 125
Alohi Gilman S Notre Dame
It’s time to start getting younger at the safety position and I’m confident with a year of understudy this is the kid you will be loving for years to come. Kilman doesn’t just look for the football he hunts for it, and when he sees his prey he fires like an ICBM. Chung showed signs of wear and tear this past year and the need to get deeper at the position necessitates this pick.

Lets get something out of the way early here Cephus came back and had a very good 2019 after sitting out a season facing Sexual Assault charges that were dropped . Cephus has great hands, the mentality on the field of a bulldog when it comes to snatching footballs, he plays X-Y and Z spots and would more liekly thna not be a second round pick if he hadn’t had to sit out that year.

McTelvin Agim IDL Arkansas
Agim has just one season on the inside before this he was an End so there is room for improvement in any film you’re rushing off to see right now. What I see is a versatile D-linemen, someone Bill can use in many ways. He explodes into gaps and goes after the ball carrier like my sons fighting for the last porkchop. Listen folks be patient, you are not going to find BIG VINCE at 172.

Joe Reed WR Virginia
This may be the sexiest pick I could make at this point of the draft. Reed is a versatile Wide-out with speed to burn and field vision that makes DB look stupid. You want versatile, Reed lines up out wide – in the slot – on the line and in the backfield . oh and he returns kicks and works on the coverage team, An absolute steal

This should make you all happy, and yes he should fall here , don’t let the name fool you while he is a fine ball player he is not hi dad, project him as a very good blocking TE with decent hands, most of his production came off miscues and broken plays but he still made them and I like that.

Dane Jackson CB Pitt
Okay I’m going to need some help here for this pick to fall to the Pats at 212 but yea it could happen, especially this year. Jackson has all the tools he just needs polish. And who better to learn from than this group of vets, he will have some issues sticking with the fastest guns in the east but what’s there is a solid Nickel.

Trey Adams OT Washington
Adams could be long gone by this pick but with his injury history he could also easily make it here, Trey Adams is a massive man at 6’8 and 314 lbs he is beastly in the run game and for a man this size is a good pass blocker, fine depth project pick here.

Nick Coe Edge Auburn
I know you’re asking why did you wait this long to take an Edge guy Murph, well most of the beefiest talent the prime rib at this position is not on the Patriots budget, and what is, isn’t worth the price . If the Pats had a second Rd pick I would have gladly brought to you someone you may have heard of. Coe is a decent option with a skill set not much different than players taken in RD 4 or 5.

Tyler Clark IDL Georgia ( Never Mind ) Gronk
Wouldn’t be a Patriots draft without taking a Bulldog . Clark is a sold option here a man who fills gaps and rarely gets blown up or off, at 6’4 300 lbs it’s worth the shot here to coach him up and make a seventh round pick something useful.

That’s it my rabid readers, I went deep threw a few prayers up and hopefully Bill reads this and does as I’ve suggested.  As always you can follow / give me grief on Twitter at @Tmurph207