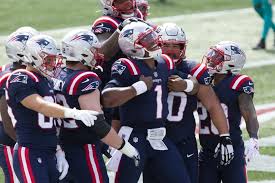 I feel like we were just here, Don’t you ? I’ve forever hated Thursday Night Football , if you have ever played this game at any level above pop warner you understand how important rest is, the contrainans will bring up the fact that whatever team you are playing on short week is also in the same boat. True, but the product isn’t the same. Guys are beat up – legs are heavy – arms are sore – shoulders ache – heads hurt. But here the Patriots are fresh off the best win of the season looking at another top five offense – facing a top five defense – trying to keep it’s head above water. Here are my Monster Keys to helping that happen.

You may have noticed some strange formations in the Patriots backfield last week, Running backs lined up offset in front of the QB – Running backs stacked up to the left or right of the QB, RB’s lined up horizontally next to the QB, well as Jeff Howe of The Athletic ( subscribe people )  pointed out way back in September it’s the “Go-Go” formation, an offense that helped Cam Newton to his success at Auburn, using this formation opens up RPO doors and plays to Newtons last best weapons , his – height – strength – power and ability to read what side an RPO should work best. It confuses defenses in the same way a zero blitz confuses opposing QB’s. people call it a High School concept , well maybe but with Cam Josh and Bill it could be a Super bowl offense.

More Motion more better, be it Harry in TE Joker Mode (wow wonder who said this WAY back on the day he was drafted ?) or Izzo moving into the backfield or splitting Mr Johnson – Mr White or even Cam out wide, More Motion has meant more running space it’s meant open receivers and sticks moving.

Don;t play from behind them, Be it positive yardage or eliminating early down motion – false start – holding penalties. Don’t allow early down stupidity to become a plus 10 need .

Win the turnover Battle . again this team is not good enough to give their opponents extra shots. Take care of the rock and go get Cam added opportunities.

Get up quick . score points in the first quarter do not chase this team

Limit the Laundry ….  It’s here for a reason. Penalties kill

Own Third Down …. Newton may have had limited completions last week but 7 were for first downs….

A Whole Roll of Quarters

While Sean McVay is one of the most innovative coaches in the NFL he isn’t one to stray far from home so here we go back to a key i cut before Superbowl LIII for the AFC championship game vs the Chiefs ….. Quarter coverage, Quarters or Cover four allows Bill to use his Cornerbacks in Press to Jam at the LOS and reroute receivers or Press Bail. allows the Safeties to Shade inside and cover the stem and allows for the front to clog up the run game. Keep it confusing dont let Goff or McVay AKA Jiminy Cricket see what’s coming

The Pats Front needs to once again win in the trenches alone. Bring that pressure with four and contain Goff in the pocket, Don’t get pushed back behind the QB and not so much escape to gain yards with his feet but keep him from extending plays waiting for Woods and Kupp to get open as the secondary breaks down.

That’s it my rabid readers , I don’t know if the Pats can win out and get to the playoffs, what i do know is if they execute tonight they can grind out this victory. A always you can follow/give me grief on Twitter @Tmurph207