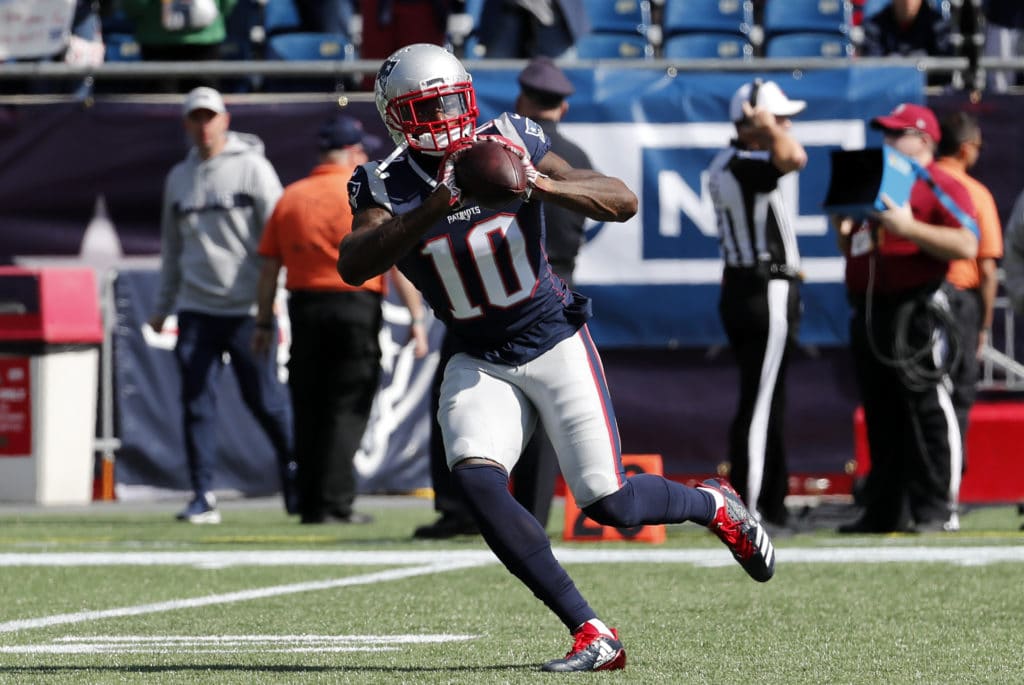 Monster Keys to Patriots vs Vikings

December Football, Cold – Rainy – Miserable if this was 1973 and Bud Grant was leading the Vikings into Foxboro i would be a bit worried, but it isn’t and they aren’t. This is Â 2018 and the Vikings play in a nice climate controlled mall and are coached by Mike Zimmer. Now donâ€™t get me wrong i am not putting down playing in a Mall, My Hockey team did it before anyone else thought of it ( que up Brass Bonanza ) or Mike Zimmer. Zimmer is a fantastic coach who has taken on all comers and won. BUT he’s also a tad bit predictable at this stage of his career and there are weaknesses to his game plan. And I have them. I have them all. If i have them you know the Hoodie does. Sundays showdown w The Purple Mall Walkers will come down to execution, placing the right Key in the right door at the right time and unlocking it. Here are my Monster keys to Patriots victory. Dontcha KnowÂ

I don’t want to see the Patriots go full no huddle this week, that would be counterproductive to keeping the Vikings offense off the field. I also don’t want to see a slow down 35 carry day by the Pats RBâ€™s that’s too predictable.A good mix of up and slow tempo play is what’s needed to keep the Vikings D on the field, off balance and Tom Brady and his band Marching Sunday.

I could give a flying fig to what talking heads and paywall pundits have to say about Sony Michel and the Patriot run game. It is a key to this team being successful. And i will hump these stats all day. Having said that it is not easy to do against a Mike Zimmer Defense. Trap Blocks are the way to gain ground vs this team. Get a hat on a hat up front with Gronk in motion. This will keep the back side ends from crashing and watch run lanes open up and Sony rack up Stats i can hump all next week. Boom Chains move.

Once the Run Game has been established it’s time to allow TB and Crew to light it up. Under Zimmer The Vikings run a ton of cover one cover three with Xavier Rhodes playing man on the # 1 receiver, But itâ€™s Single High Safety stuff ( Stuff that’s a technical term Stuff ) trying to funnel everything to the inside of the field. It’s A very good system. But when you’ve established the run and now turn to play action holes open up across the middle for Dig routes. Linebackers are sucked up or holding their spots looking for the run, and daylight opens across the middle of the field. Can you dig it ? I knew that you could â€¦. BOOM Chains move

Seam routes are cover three killers, the vikings battle this by not letting go of receivers running up the seams. What this does is force the CB into single coverage with no help underneath, Curl routes – deep comebacks – speed Routs and outs, all exploit this concept. And when or if they adjust it leaves Gronk and Gordon open down the seam in single coverage. And what do you know … BOOM chains move

Pin Them Deep Flip the field

Be it on kickoffs or punts , you have to pin this Vikings team deep and force them to march the length of the field, i want ZERO return yards off kicks and punts this week and i care not a rats ass about how the Pats go about it.

The Vikings have turned the ball over 16 times this year. Cousins has thrown 7 INT and has 6 Fumbles on his own. Get these extra possessions and turn them into points.

There is one weakness to this Vikings offense and it’s Not a good weakness to have. Pressure. The Pats need to blow up the Vikings O- Line win the trench, get pressure into the backfield and in Cousins face. Donâ€™t give him space to bootleg. Don’t let him roll outside. Force him to throw balls away and he will toss INT’s. Pressure Diggs Thielen and Rudolph at the line and get them off their routes. Â PRESSURE â€¦.PRESSURE…PRESSURE

After last week i don’t want to see a single flag â€¦ NOT ONE .

That’s it my Rabid Readers.. Lets not make this more difficult than it needs to be. The Vikings have not beaten a winning team all year. That’s a fact . teams the Vikings have beaten this season are 20-43-1 (.317). Am i supposed to worry about them ? The Patriots should win this game and win it easily. If they don;t they will have beaten themselves. The Keys are on the ring, Unlock the Doors and â€¦ Boom Move the W column