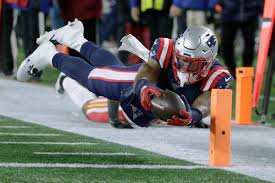 In 2018 Bill Belichick may have proven once and for all who the greatest head coach of all time is. Over the course of four weeks in January, he devised three completely different game plans using the same 46 players to shut down the three most powerful offences in the NFL. Like a priest  who caught a young 12 year old Irish altar boy in the sacramental wine, The Hoodie smacked the Chargers, Chiefs and Rams across the back of the head and sent their vaunted offenses back home head hung to their parents to confess their sins and take another slap. In short it was a thing of beauty and it gives me great hope that Bill will once again coach up the perfect scheme to shut down the Chiefs and shut up the KC fanbase …. Here are My Monster Keys to Patriots Victory

JC Jackson in Kelce’s pocket – Gilmore eliminates Sammy Watkins and toss speed at Hill. Trying to cover Kelce with a LB or a safety is a fool’s errand, JC has the size and strength to handle the loud mouth, Gilmore is at his best when covering #2’s and should keep Watkins’ slippery self from moving the chains. I give ZERO FUCKS about Gilmores ego. Here’s your assignment: go handle your business. Jon Jones is the man to shadow Hill with D-Mac over the top for help. It’s worked before and I expect Bill to toss a new twist in here some place but this needs to be the base plan on Sunday.

The Best defense is a good Offence

Again Ego’s out the door. We do not need Newton tossing into triple coverage down field to get on Sports Center. Take what they give you underneath and move the chains. The high percentage throws keep the clock moving. If they flood the middle? Paging Dr. White – Dr, James White, it’s bubble screen and wheel route time .

Use motion to stack trips to one side of the field and force single coverage on Harry to the other and there is Cam’s opportunity to stretch the field. Again use motion to run slant flat concepts to attack the middle of the field with Rex and Mr. White there for the check downs. If the Chiefs get into robber. Yes people I’m using the pass to set up the run

If the Chiefs want to run the ball Good-Fine.  I could give a hang.  This goes back to the day of Peyton Manning in Indy, – beg them to run, pretty please with sugar on top. But respect the gaps, do not get caught on the back door Mr Winovich and do not miss on the edge. No yards after contact, do not let him get outside.

Own third down … On both sides of the ball.  The Pats were abysmal on third down last week; they need to convert on early downs and get to third and short. It will take a 60% rate to win this game. Burry Mahomes deep and force him to march and Get him off the field.

Don’t Settle: this is a definite get me seven week – yes, no missed extras please.

Limit the laundry .. the Pats are still the least penalized team in the league – lets keep it that way.  Do your part Mr Gilmore.

Win the turnover battle: the Pats will need at least two extra possessions this week. three more would be better than the Chiefs have when the numbers are tallied up. Take care of the rock Cam .

While the first key to this victory is all important. you all saw what happened in the second half of the 2018 AFC title game: when the Pats got tired the Chiefs climbed back into it in the fourth quarter.  That was fatigue not brilliance on KC part. Depth in the defensive backfield is here and needs to be used. Everyone has to step up .

While I opened up the offensive keys with the Pats moving the chains through the air, yes you need to keep the Chiefs honest on the ground and yes Bill has the horses to do so. Once the short – intermediate passing game is being respected, release the hounds.

Thats it my Rabid Readers , I could be wrong on every level – The hoodie could run cover three all day like the chargers did against KC week one or he could grind them into submission with the Hydra he keeps in the RB room – but i’m not.  This is the best way to attack this team , there is more than one way to shorten a football game there is more than one way to keep the ball from Mahomes hands. I want this win – I’ve been bleeding for it since the last matchup , I hate this town, I can’t stand the fans ,especially that shit they call BBQ . Not to mention that horse faced blonde bubble head Mahomie put a ring on.