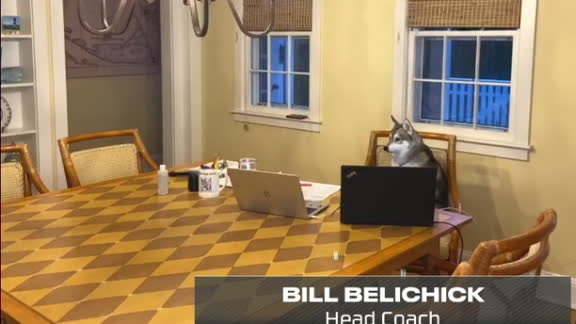 Once More unto the breach dear friends once more

Yes my rabid readers – my addicted draft junkies – my codependent card is handed in friends, we have traveled the long and winding yellow brick road that is draft season and reached the emerald city, Now the only question left is , Will the great and powerful Hoodie grant our wishes? Because when you get right down to it, in New England that’s all draft prognostication truly is, you can look at needs – you can check the depth charts – you can ponder the advice of the Lollipop Guild but in the end that is all we are doing here. Making wishes. Hoping to shape the team in what we or in this case I think is the best case scenario for this weekend’s trek through the dark forest. And come out on the other sided fully loaded and set for the 2021 NFL season, Here’s my Monster Wish List

Parsons by far is the most impactful defensive player in this draft, he has the highest ceiling in the 2021 class. That ceiling in my estimation is Canton Ohio. He is also one of the most polarizing, More than one off field issue while at Penn State has pushed him to the middle part of the first Rd, at 6’3 246 Parsons is a granite chiseled weapon of mass destruction that in the right place with the right people to help him develop could be the next decades great linebacker in New England.

When top WR prospect Ja’Marr Chase opted out of the 2020 season Marshall was given the opportunity to shine and shine he did, despite suspect QB play Marshal finished the season with 48 catches for 731 yards and 10 TD. Many predicted Marshall gone by this point in the draft but a broken foot report has him sliding down a lot of boards and I think with a slight move up or a bit more slip he could be here in 2 for the Pats.

Here’s where I and Bill start to make some hey, with my perfect Patriots picks.  it actually maybe some wishful thinking on my part the way he has shot up in draft rankings and MOCKS at this point and i understand why, Rogers is a dynamic talent with an NFL pedigree, i talked earlier that WR coach and former “Brady Six” QB Tee Martin is his father , the Patriots need that next true slot guy they need weapons and Rodgers is that guy.

Again we are getting one of  my Perfect Patriots in the 2021 Draft. I wrote at length a week or so ago about Osa and his very special skill set, follow the link to get the complete rundown. But I feel at this point in the draft a run stopper who can also shoot gaps to the QB is needed and Odighizuwa checks both those boxes.

Peyton Turner may be the only Peyton I have ever enjoyed watching play football. He is a 6’5 270 Lb wrecking ball with  35 ⅜ “ arms that swept through the AAC like a man playing against boys. Want to talk off the chart mesurables? PFF gave him a 90 pass rush grade in 2020 – has a 36’’ vertical leap – pounded out 23 reps on the bench – ran the short shuttle in 4.25. Not to mention has a Three Cone time of SIX POINT SEVEN ZERO seconds, now go back and see the size of this man, Turner racked up five sacks this season while playing just five games for the cougars in 2020. Payton has experience playing both inside and outside on the defensive line, versatility is a trait we know the hoodie covets. And could be a slam dunk at this spot on the draft.

If there is a School in Ohio I don’t loath it’s MIAMI, we all know the age of this line both in years and contracts is getting up there and I believe at this point of the draft the Pats could do with a bit of depth along the line. Tommy Doyle fit that bill perfectly. Doyle is a massive man 6’8 but at a put together 330 lbs. he can play both left and right tackle and needs some coaching up when it comes to footwork but has elite numbers in all the areas the Pats look for in the drills including a 4.57 shuttle and an ungodly 7.42 three cone. Doyle  looks to be the perfect redshirt Patriot. And on day three that’s a TD all day.

Have to give my main man Steve Balestrieri all the cred for bringing this name into my life on (One Patriots Place) this week. Listen to the show on Spotify, while reading up and watching some tape of this young man i can say something is going to have to happen to get him to drop here, but hey let’s dream

We are at pick 188 people ONE EIGHTY EIGHT, and i have here a player who lines up all over the field and explodes from wherever he may be, Felton was a WR who the Bruins converted to RB and then started using in the way the Pats use Shane Vereen and James White to help fill the Lombardi case at Gillette. Why he is here I have no idea if someone out there some assistant GM or some intern may read this and speak up trying to make a name for themselves and well before 188 he;s gone. But if he;s here the Pats could do a hell of a lot worse. Than this WEAPON

Back to the perfect Patriots , hey I’m not going to apologize i did a lot of work on these, and i loved the work i did on this young man. To the point where I wish I had taken him in the third round, but hey I’m pretty sure enough people are sleeping on the man who shut down some of the biggest names in this draft, not for a play or two but for entire games. Names Like Pitts – Smith – Waddle – Harris, are hoping they don’t look across the line of scrimmage and see Tyree in their future. While he may not test out in some of the areas the Pats value most – short shuttle – three cone, but he has it where he needs it, between the ears. and trust me if Pitts is going to Miami and he is, you want Gillespie on this roster.

Round Seven Pick Whatever

Okay folks my brain is toast , honestly I don’t expect this pick to even be made , actually we may be done with this draft around pick 140 . but i will tough it out and with the whatever pick of the Seventh round the Patriots select

I really wanted to grab Georgia Center Trey Hill but his knee surgeries scared me off, Dalman is a great prospect and with the right TLC could end up being a more than serviceable iOL for the Pats

Now you may look back at this draft and chuckle how wrong i got things, but remember No one gets the Pats draft right, NO ONE. also there just wasn’t a glaring need i saw that could be skipped over to draft a QB who may need a year plus of understudy, is there some double dipping at positions yes, but that’s where the meat was at certain positions. This team is built to contend now. and this draft reflects that and addresses the needs of the future.  as always you can follow / give me grief on the Twitter at @Tmurph207