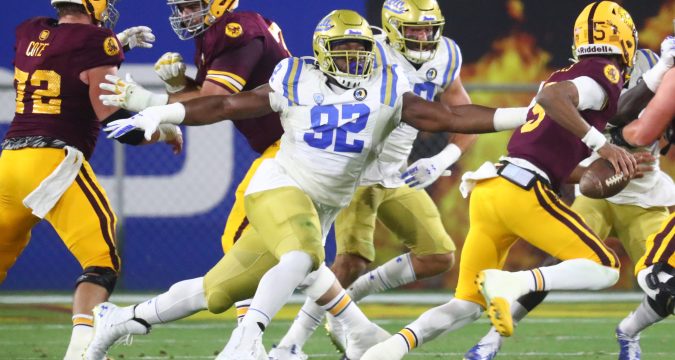 While I was watching  UCLA game film I happened across a young man whose name sounded vaguely familure . Osa Odighizuwa: who turns out is the younger brother of 2015 Giants draft pick Owa Odighizuwa. What are the odds ? As it turns out , pretty good actually. So I dug deeper and deeper and may have struck day three gold at a position that is pretty thin in this year’s draft, especially considering the position we are talking about Defensive Tackle. (get it?)

If you can look back at one of the Patriots biggest issues on the defensive side of the ball last year it was stopping the run. While Bill did his best in free agency to address these needs it’s still a point of concern with this writer. So I started looking at possible solutions to fill that bill late in day two or early in day three of this draft. While Osa (I’m dyslexic people cut me some slack on the last name) is on the smaller side at barely 6’2 he has the power and length to stuff the run and stuff it with authority at the next level. He uses his shortness to his advantage getting low and using his close to 35 inch arms and strength to control the man in front of him shed blocks and drag ball carriers to the ground like few guys you will find in this year’s class. Leverage + Length + Power = A hard time for the O-Line.

This is a man who explodes off the snap – uses his body like the three time all state HS wrestler he is to shoot through gaps and get to the ball carrier and has the late burst and reach to not allow them to escape. Add that to the discipline I see in his game as to his assignments and from the looks of things it’s a can’t miss ( at this point in the draft) with the right amount of time to learn the position. While you have heard me in the past put down puny humans even at his size Osa plays with a gamma induced fury that you have to respect. Pair that with the intelligence and discipline he showed me on tape and we are talking professor hulk with his hand in the dirt. Now before you start ripping me, remember where I’m projecting or asking the hoodie to draft this kid.

Osa is a three year starter who reminds me a lot of my old friend Stephon Tuitt. You know how much I loved Tuitt coming out of Notre Dame ( excuse me while i scream into the night ) okay back to the action. Osa is an amazing rotational prospect as a five technique DE and can also (with some coaching) become a good pass rusher in Nickel.