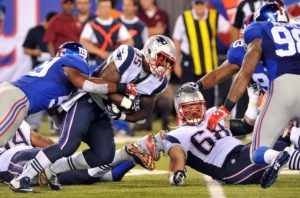 Preseason Is Finally Over

With the final whistle tonight we close out the Patriots preseason, and look to the regular season. The coaching staff hast to trim the roster down to the required 53 player team. I’m not gonna sit here and tell you I’m a expert by any stretch of the imagination, but I have a few thoughts on what I think might go down. Let’s dive right into it.

First off are you as happy as I am that the preseason is over? I’m a Football fan through and through, but the fourth game of the preseason is rough on the eyes.Â  We are generally exposed to players on the bubble or players a coach wants to get more reps in.Â  Either way the pain is now over.

Who Impressed Me Tonight ?

J.C.Jackson with two picks and Nicholas Grisby were the standouts on defense tonight.Â  Both of them made enough players are in my opinion are safe.Â  I think the player who is gonna be the biggest question mark on making the team is Jason McCourty.Â  He played a lot at safety again, and that doesn’t usually bode well for someone on the bubble.Â  Normally when a vet plays a lot in the fourth preseason game, they are on the verge of being cut.Â  I don’t know but my sense is he won’t be on the 53 man roster.

How Will It All Turn Out ?

I’m really curious to see how this roster takes shape.Â  There’s a lot of speculation coming your way in that department. I wouldn’t be surprised if they keep an extra body for the o-line just for depth purposes. They’ll be players brought in from other team’s cuts, or via trade.Â  In a perfect world, you will see another WR brought in here.Â  This is Bill Belichick that we’re talking about, so it’s anyone’s guess.

I know I am ready for week one against Houston,Â  and the rest of a promising Season. I’m very much looking forward to covering the patriots this season.Â  This is the team I grew up with loving from the very lean years in the 80’s and early 90’s, to the powerhouse that they’ve become over this 18 year run. I hope I can do this thing right for everyone, and offer some different analysis then other’s. I’m just a fan like many of you out there just trying to give you some reading material. I wanna thank everyone whose shown me support with this along with Steve and Myself’s Podcast! You have been awesome, and it’s means a lot to both of us!