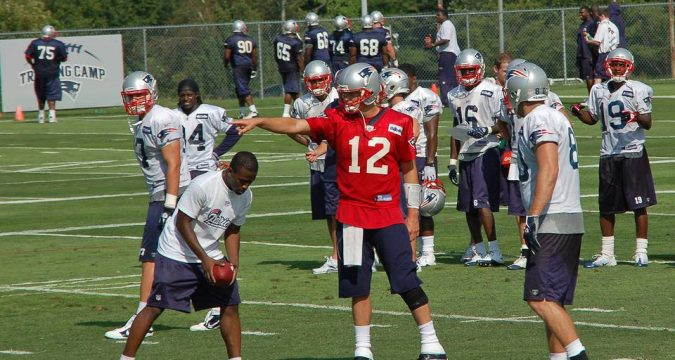 With the Patriots training camp starting this week, it is time to start gearing up for another season of Patriots football. With the new season brings new hope for a return trip to the Super Bowl, something we have become accustomed to up here in New England.Â  This year should be a fun ride with peaks, valleys and every emotion in between.

What do you expect from this team going forward? I know it is really early, but that is what we do around here – look ahead instead of what is in front of us. There is a lot of optimism for me this season especially on the defensive side of the ball. I really believe this defense has the making, at least on paper, to be exceptional this year. They lost defensive stalwart Trey Flowers, but replaced him with Michael Bennett along with promising draft pick Chase Winovich.

The defensive line should be in good shape with the returning starters mainly intact, but there is still questions on the line as always. Can we finally see Derek Rivers play a full season? How about Deatrich Wise? Will he make a jump this year? These are just a couple of stories I will be watching going forward.Â  The strength I believe is the Linebacker corps for this defensive unit as a whole. When you look at what they bring on the field, it has the potential of being very good to elite in the league. They’re deep across the board from Hightower, Van Noy, Bentley, Roberts, and old friend Jamie Collins.Â  How that area shakes out has really caught my attention. Â How could you not get excited about this lineup?

There is one position off the field that really intrigues me and that is how the defense will look with the loss of Bryan Flores. The now coach of the Miami Dolphins was very good on this team. The coach was well respected across the board for his ability to simplify the playbook for everyone. I very much liked his play calling, something I hope they continue with going forward. I love it when a defense puts pressure on the quarterback. What does everyone expect from old friend Mayo this season on the sidelines?

I think Mayo is gonna do an awesome job going forward with the team. I have been saying for a while that Bentley reminds me of him. The man was a tackling machine on the field in his career with the Pats. When camp begins, so does camp for him being in a position he’s never been in before. I am curious how he does there.

With the secondary still intact there are only a few names I really wanna see during camp: Duke Dawson, and Joejuan Williams.Â  I wanna see what they have in Dawson, and with him being out last year the curiosity factor is a 100. With Williams from all reports he’s a very good corner. What I like about him is his size. At 6’4″ he has the capability of going up against taller wideouts in the red zone.

With all that being said I’m ready for Pats camp to begin. There is gonna be a number of articles out there on every position on the team. Do yourself a favor check them all out, as it isn’t easy putting together a piece. The best we can hope for is good health with the players going forward along with camp surprises.

That is all for now. Enjoy camp and as always Go Pats! You can follow me on Twitter @Chris_Blackey along with our weekly podcast Bostonsportsblitz available on all of the platforms out there.