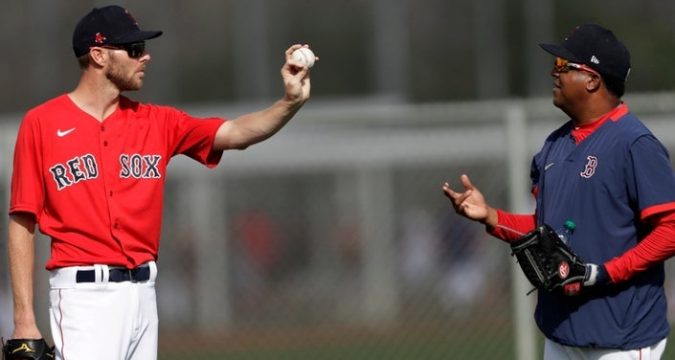 The Red Sox are set to enter the 2020 season with a starting rotation consisting of four names. Yes, you read that correctly, four names. Quite different than the traditional 5-man rotation weâ€™ve grown accustomed to, Red Sox Nation has some questions that need answering before a first pitch is thrown to open the new season. Will the answer come in the form of a trade for a starting pitcher? Maybe a remaining veteran free agent signing? Will it be a guy from in-house that gets his first crack at a big league rotation? Could it be a guy weâ€™ve seen before (Brian Johnson-esque) thatâ€™s thrown out every 5 days in hopes that our teamâ€™s offense that day is better than that of the opponentâ€™s? Or could we see Chaim Bloom return to his Tampa roots and employ an â€˜openerâ€™ strategy that the Rays have made famous? Either way, I want answersâ€¦and I want them sooner rather than later.

The first man in the rotation is Chris Sale, whoâ€™s looking to bounce back from an injury-shortened 2019. Of course, when healthy, Chris Sale quite easily slides into the â€˜best pitcher in baseballâ€™ conversation. But health and durability have been his downfall. With a whipping motion in his mechanics, the tall and lanky lefty escaped what most seemed would lead to a Tommy John surgery late last year and has already started throwing in Spring Training with a sleeve on his left elbow area.

Next in the rotation would be Nate Eovaldi; who is also coming back off a season filled with injury and setbacks. Nasty Nate threw under 70 IP in his 2019 campaign due to being on the shelf, and when returning from injury, actually had a stint in the bullpen. The idea was to maybe bring him back as a closer which didnâ€™t go according to plans. The hope is that heâ€™s healthy and can return to his normal role in the rotation. And heâ€™ll need to be someone the Sox can rely on to at the very least have a healthy and full season in 2020.

Following Nate would be Eduardo Rodriguez who actually had the best season of his career in 2019 and is poised to continue improving in 2020. In 2018, E-Rod went 13-5 with a 3.82 ERA. In 2019, he went 19-6 with a 3.81 ERA. The improvement is there, and he looked a lot more comfortable last year than any of his previous seasons, in my honest opinion. The only potential problem is that, though he continued to improve, he was always at the back end of the rotation with guys like Sale, Price, and Porcello ahead of him, so there wasnâ€™t a ton of pressure on him to be a front-of-the-rotation starter. This year, thatâ€™s not the case. The Red Sox need E-Rod to not only continue his improvement, but to be able to be a guy they can count on to give his team a chance to win every time he toes the rubber in 2020. Weâ€™ll soon see if heâ€™s up to that challenge.

After that is Martin Perez, whom the Sox signed in Free Agency coming off an average season with the Twins. Though Perez did throw 165.1 innings over 29 starts, he finished the year with a 10-7 record and a 5.91 ERA. His new club would be pleased if he can replicate the QUANTITY of starts again in 2020, but the quality of those starts is where heâ€™ll need to improve. Hopefully with a change of scenery and a clean slate with a club that has a new skipper, Perez can slide into a reliable middle of the rotation guy and help produce some wins for Boston.

For the fifth, and vacant, final slot in the rotation, there are a number of ways the Red Sox can attack here. The first, and easiest option, is to sign a remaining free agent to a one-year pact and hope that he can turn in a good year. This would be beneficial to both the Sox, and whatever player that may be, to help justify inking one last big deal before considering retirement or other career opportunities. The only problem with this option is that the list of remaining free agent starters is far from appealing. Former Toronto starters Aaron Sanchez and Marco Estrada, a couple former Sox in Andrew Cashner and Clay Buchholz, and Matt Harvey. Could I see a reunion with Clay happening? Probably not, but he turned in a decent 2019 campaign so maybe heâ€™s worth a shot on a cheap deal. I can also get behind a Matt Harvey deal in hoping that a new market and shot at a rotation could rejuvenate his career, but that seems unlikely. Though if he didnâ€™t pan out as a starter, he could be a decent upgrade to the long-relief area in the bullpen.

I canâ€™t see the Sox being able to trade for a starting pitcher at this point in time that would be of any real value to this yearâ€™s team, unless a Wil Myers deal is completed and a guy like Quantrill or Lucchesi is included in the return.

The chances of an in-house option being promoted seem very slim right now barring a phenomenal spring from a young prospect. The only chance I see this happening is maybe with Chris Mazza, but heâ€™s 30 years old with little big league experience, so unless he makes a drastic change for the better at this point in his career, I donâ€™t expect much out of him.

Then thereâ€™s the options weâ€™ve seen before. Brian Johnson, Hector Velasquez, Ryan Weber. None of which strike me as: Thatâ€™s our guy! Iâ€™d say if this were the route the Sox want to go, then Hector Velasquez has the most appeal, though Brian Johnson has slightly more experience in the role.

Lastly, the idea of an opener. Though I never thought the Boston Red Sox would be a team in need of ever considering this strategy, itâ€™s starting to look more and more likely that there is indeed a chance that this is the route Bloomâ€™s 2020 team will take to occupy what would be the 5th role in the rotation. Chaimâ€™s seen this strategy have success in Tampa and could look to roll the dice on the idea again here in Boston. Iâ€™m not entirely opposed to the idea, though I donâ€™t like it, you run into the issue ofâ€¦Who would the opener be? There arenâ€™t many guys Iâ€™d consider out of the pen to be THE guy that goes out every 5th game for 1-3 innings, so the question would be then does the â€˜openerâ€™ role also have its own little rotation.

Regardless of the route the Sox choose to take to fill the last slot in the starting rotation, Iâ€™m beginning to grow impatient of wondering what their answer is going to be. Hereâ€™s to hoping we find out soon.

Feel free to reach out to me on Twitter at any time, between articles or just if youâ€™re curious about anything, Iâ€™m always happy to talk Boston baseball with anyone. You can find my Twitter handle below, and if you shoot me a follow, thereâ€™s a good chance Iâ€™ll follow back!