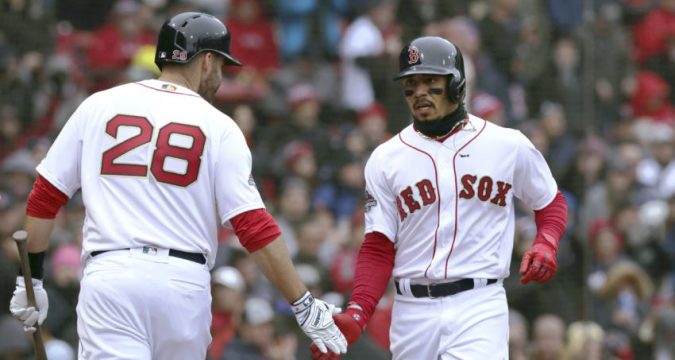 I’m tired of ALL those Yankee fans blabbering on about being in 1st place, and how good they are this year. When you confront them about it, they say what a Yankee fans say “well come talk to me when you have 27 Championships” and then nothing after that.

I’m not discounting any of that, but when you break it all down literally, one phrase comes to mind, what have they done lately? The answer to that is simple, not much. The Yankees still have a record that will never be broken by anyone else, and they are responsible for the worst choke in playoff history. Yes that’s right, I’m talking about the series where they were up 3 games to 0 and ended up losing four straight games to our beloved Red Sox.

So my point in all of this, is that it isn’t over till it’s over, the Sox still have a chance to overtake the Yankees for first in the AL East. If not that, they have a really good chance of at least getting one of the wild card spots. If they get one of them, look out. There team can match up with anyone currently in playoff contention.

Pitching is coming around

Porcello had a gutsy performance last night to say the least, and if it weren’t for that one long inning of 47 pitches in 1 inning it would have been phenomenal. It was still decent as he lasted into the 6th inning before handing it over to the Bullpen.

As for the offensive output on Friday night, a total of 19 runs on 23 hits in the game, almost everyone had an RBI with the exception of Martinez, Holt (who got ejected, and rightfully so, cause that wasn’t a strike) and Travis, but to be fair Martinez did have 2 doubles. My point in all of this folks are the Yankees are not invisible and can definitely be beat, so all those Yankee fans out there thinking that the so called “27 time champs” are back, be careful what you are saying. They haven’t one anything yet, and their starting pitching has been extremely shaky lately. I can’t wait to see how the rest of the season plays out?

With that, Chad Riley Out