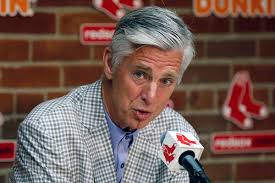 Well folks, the trade deadline is only a few days away.Â  Whatever team decides to make a move and bolster their roster now has to stick with it the rest of the season from after 4pm on the 31st of July to the end of the World Series.Â  Now you may say to yourselves, what happened to the Non-Waiver trade deadline after the July 31st deadline?Â  Well the answer to that is simple: there is no more “non-waiver” trade deadline, which means whatever team makes a move either days before or right before the 4pm deadline (not after) now have to stick with it and make it work.

So with that being said, there are a few rumors floating around that “Good Ol’ Dave” is still gonna try to pull off.Â  The reason I say this is because our beloved Sox sent “high ranked” scouts to the Giants/Mets matchup between Bumgarner and “Thor” aka Syndergaard. Now you may say to yourselves, wow it would be amazing to have either one of those ace starters on the Sox rotation. Pump your brakes though, cause the Sox were looking at relievers. Now time will tell what the Sox will do for more moves by the deadline, and if I were Dave Dombrowski I would definitely look to bolster the bullpen and at the same time possibly get another starter “just in case” Cashner does not work out, as the past 2 starts haven’t looked good at all.

Something that grabbed my attention though is that the Sox are potentially linked to Jose Abreu. Now again you may ask yourselves “why on Earth would the Sox want Abreu when they already have a solid 1st baseman?” Well the answer to that is simple, he’s another solid bat to bolster an already solid line up, but also at the same time, another body to spell Devers when he needs a day off, or even DH at times.

Now I think that this would be a great move, but that’s just my personal opinion.

Don’t get me wrong though, the Sox still definitely have to get some more bullpen help and maybe another starter that they can throw into the rotation, and slide Cashner into the bullpen as a long relief option, because at this point, our beloved Sox have to win games, and win now if they have any hope of making the post season again.

Till the 31st or before let’s see what Dave Dombrowski has up his sleeve.