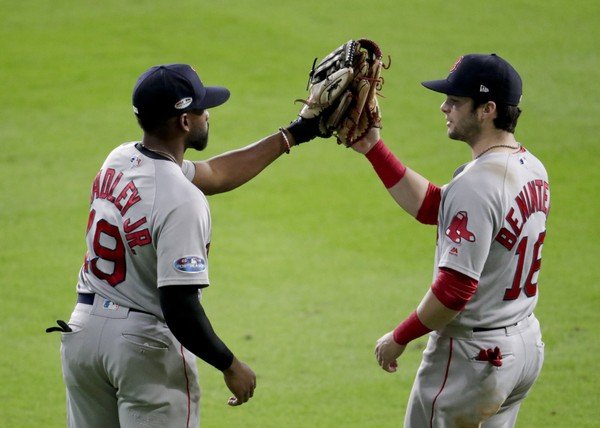 What a time we’ve got going on here in New England. With our sports teams all in action, fall has gripped the region and frost has hit the ground outside of my house.Â  Just as the cool weather has taken over, so has pennant fever. The Red Sox are 4 wins away from a World Series Championship, and this team of destiny will have completed their mission.Â  Let’s get right into what I think are some keys to the series.

Dodger Stadium: This might be the biggest challenge for Cora and the Sox. How Alex plays his lineup here is gonna be very critical in this series. Who is gonna sit out of this potent lineup? I know a lot of people are saying take JBJ out of the starting 9, but can you really do that with the way he swung the bat last series? We all know what he brings with his glove out there. The other option is play Mookie at second, but do you really wanna put him in harm’s way and lose your Gold Glove right fielder?Â  I don’t think this is gonna be easy on “Mr Midas”; all I know is I’m glad he’s doing it and not me. There are so many variables to consider.Â  The only thing I know is that I want JD in the lineup along with Mookie.

Pitching: Nothing has really changed in this department.Â  I think we can finally say “advantage Sox” here, whereas last round we all assumed the Sox were at a disadvantage. That turned out to be false, as the Sox pitchers brought it in the ALCS.Â  Who could have imagined the Sox pitchers would have been that much better than the Astros?Â  I didn’t.Â  The fact David Price outdueled Verlander on 3 days rest is all you need to know about this team. They find a way to win even when it appears to be a long shot.Â  The Sox starting pitching in this series will determine a lot with Sale, Price, Eovaldi and Porcello.Â  I like their chances.

Play your game: This can be simple yet difficult at times. The fact this is the World Series makes everything magnified. The Sox just gotta play their game here.Â  Don’t get caught up in the moment. They have shown over the course of the season they don’t get caught up in the moment. What impresses me is they can beat you in so many ways.Â  I love the fact that you either get beat by a thousand papercuts or hammered with the power game.Â  I think Cora has the pulse of his team, so I’m not concerned at all with the moment being too big.

Bullpen: What was seen as the Sox biggest weakness going into the playoffs has been a strength.Â  Who thought that would be the case? The bullpen has settled in nicely overall other than our closer. This is gonna be a huge series for Kimbrel – a redemption if you will.Â  I don’t know why, but for some reason I believe he’s gonna turn it around.Â  The supporting cast will still be called upon to make the outs and try to keep our anxiety at a minimum.Â  Don’t deviate from your system now; stick with what is working.Â  I think this oddly enough is another advantage for the Sox.Â  I didn’t expect to be writing this down, but here I am typing this down.

Timely hitting: This can’t be stressed enough here.Â  What you hope for is for you to capitalize on every opportunity, but we all know the odds are very long for that.Â  What they need to do is capitalize in the critical moments. This team is absolute bonkers with 2-strike hitting.Â  Let’s hope that trend carries over into this series. The bats will be needed here 1-9 in order to get the ultimate prize.Â  I can’t wait for this to start up.Â  World Series fever is very real.

Prediction: Ah yes, what we’ve all been waiting for – the prediction.Â  First let me say this team has been special all season. They’ve given us all a fun ride, haven’t they? I like the Sox in 6 here.Â  I feel overall the Sox are the better team, and that will show in the end.Â  Sure is a great time to be alive, isn’t it?

As always you can find me on Twitter @Chris_Blackey.Â  Go, Sox!Â  Beat LA!