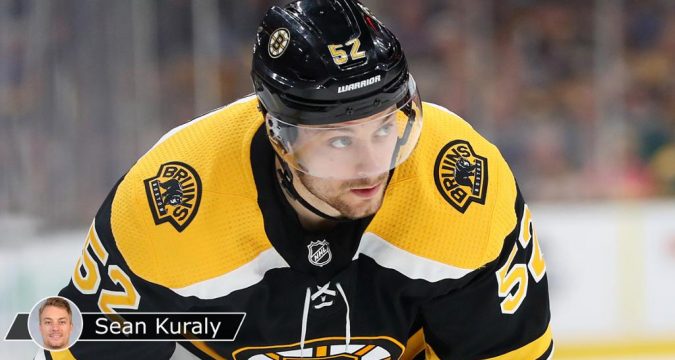 When the Bruins traded Martin Jones to the San Jose Sharks for a first round pick along with Sean Kuraly, who knew what they were getting? The player who wasn’t the main piece in the trade turned out to be a very solid player in this league. What you shouldn’t do is look at just his stats and make a decision. There is far more to hockey then what a player does stats wise.

When you think of Kuraly, what’s the first thing that comes to mind? The answer most people come up with is “Grinder.” A fourth-line piece fair enough, but he brings way more to the rink than that. When he was out for a stretch into the playoffs the bottom six was out of sync. The team was in need of their key pieces not just on that line, but on the penalty kill as a whole.

What I’m trying to say is you need players like Kuraly in your line-up. With him in the middle of one of the best “energy lines” in hockey, he brought balance back to the team. What I like about him is he does the dirty work out there. When I think about what he represents on the ice, I think Boston “Lunch Pail.” Will he ever be a 20-plus goal scorer? Probably not, but you will always be able to count on him when he’s called upon.

What he does out there doesn’t go unnoticed from the Bruins faithful. What he has is a nice personality that people can relate to. What stands out to you when you see him play? What stands out for me is his skating game, his beautiful wristers, and his attention to detail on the defensive side of the game. I love the Kuralys’ of the hockey world. There is always room for sizzle, but at times you need the potato on your plate.

What exactly is the ceiling for Kuraly in your eyes? I believe he is the type of player who could easily excel on a third line in the pros. What I believe he would say is ‘where I’m put in the lineup.’ That is the type of vibe I get from him. What will we have in store from him next season? Why not: 15 goals sounds good from him on the year.

I just know hockey needs to hurry up already. We all miss it, and that is something we can all agree upon. With all that being said, I think it’s wrap-up time.

What you can do is give me a follow on Twitter @Chris_Blackey, We all appreciate the support from everyone. Have a good day everyone.