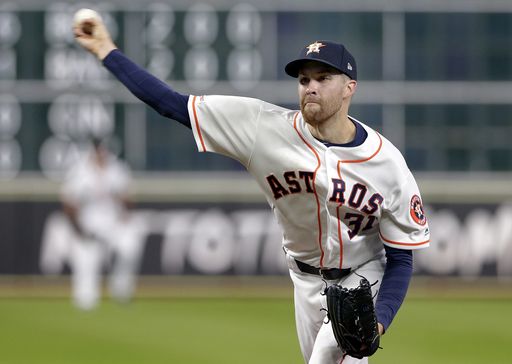 The Red Sox today announced a move that finally made me say, â€˜okay, Iâ€™m good with that.â€™ No they didnâ€™t go out and sign a stud, and no they didnâ€™t make a blockbuster trade for an ace.

Instead what they did was sign RHP Collin McHugh to a one-year deal, $600,000 (incentives can bring the deal up to $4.25 million). It needs to be stated that he is coming off an elbow injury and is not expected to be ready for Opening Day. However, upon his return to the team, McHugh has shown interest in the flexibility of being used as a starter or a reliever. In his 210 MLB appearances, 119 have been starts and 91 have been out of the bullpen.

Bostonâ€™s head honcho, Chaim Bloom, has expressed at least some interest in utilizing an opener strategy for the fifth slot in the rotation. In my opinion, McHugh would be a perfect fit for that role. Heâ€™s a guy whoâ€™s shown he can eat innings and get outs. If the â€˜openerâ€™ route is truly the way the Sox want to go, I firmly believe McHugh would be able to give you 2-3 STRONG innings, if not even stretch out to 4-5. He had a decent 2019 campaign, but as recently as 2018, he posted a 1.99 ERA in 72 inningsâ€¦although it is important to note that season he was used primarily out of the bullpen. Is it perfect? No. But I can absolutely live with Collin McHugh as the 5th man in the rotation, as opposed to a Brian Johnson or a Hector Velazquez.

Speaking of Velazquez, the Red Sox designated him for assignment to make room on the 40-man roster for McHugh. I just really hope when he is ready to join the Red Sox rotation and/or bullpen, that he can remain healthy. If he stays on the field and off the IL in 2020, I think this move has the potential to be a very smart and safe deal with tremendous upside for Boston.