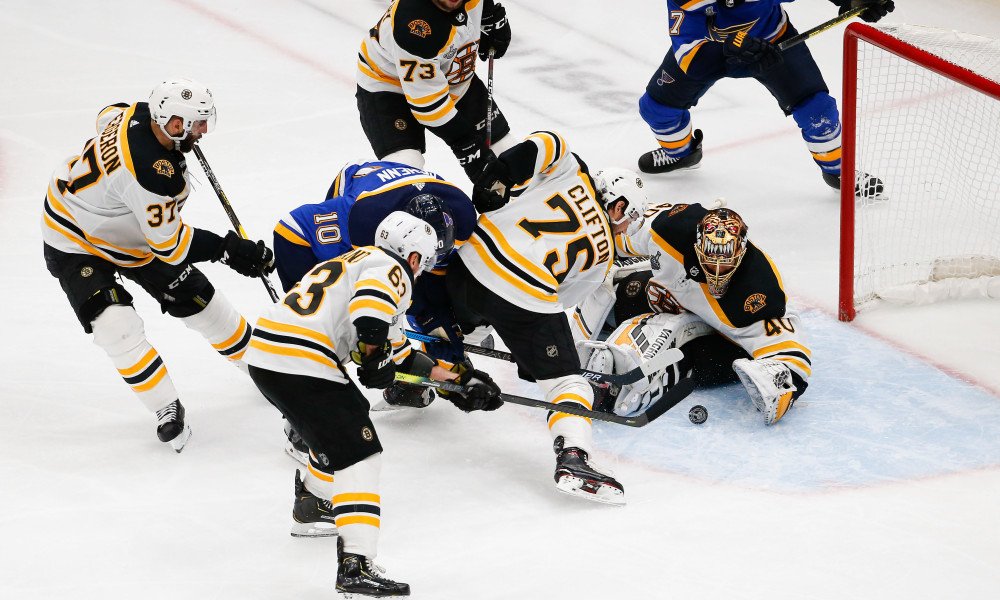 Tonight’s game is what the Bruins have played for all season.Â  They have home ice advantage in a pivotal game 5.Â  A win and they go up 3 games to 2 in their best of seven series with the Blues.Â  There will be more than a few stories written about this game for years to come.

The Bruins who lost Chara in game four to well let’s just call it a face issue might be back for game five. There are tons of stories out there saying he will be in, I don’t know for sure if he is playing or not.Â  What would be another boost for them, would be the return of Matt Grzelcyk.Â  I feel confident he will return into the Bruins lineup. The Bruins have had a few injuries in the last few games, let’s hope this is the end of the injury bug.

What has been this Bruins team strength all season is their ability to bounce back from adversity. This will be no exception especially if neither of them suit up. I believe we would see Steve Kampfer inserted into the lineup as the fallback option. The next man up mentality is what it is all about this time of year. I wonder where we’ve heard that one before?

We know the Blues are gonna come out and hit, that is what they do, nothing is gonna change now. What the Bruins gotta do is match them, and don’t shy away from contact.Â  I feel very strongly this team can do just that, but I’m not out there playing thankfully. This series has been a back and forth grudge match so far, is that going to continue?

The Blues are capable of bringing it to the Bruins; in the two games that they have won Blues were the better team. What I wanna see now is can they beat them with 6 d-men on the ice for a full game? We can’t just assume the Bruins will win because they’re the Bruins can we? The Bruins need to play their game here, no time like the present.

I know that I’m not alone here in saying, can we start winning some battles here even strength ? The Bruins gotta be better in that department period end of story. I don’t even know where to begin with that second line right now do you? The top 6 gotta be better here please the fans are waiting for it.

I think another thing we should keep in mind is, if Chara is able to play does Bruce dress seven d-men in the event he isn’t effective? I believe you gotta in a event just to cover your rear end. The next question would be who sits? I have seen various people on social media say Heinen, I am absolutely opposed to this. The Coyle line has been your best line in this series by a country mile.

I think that leaves Backes as the odd man out. I love his physicality, but that second line is a ghost right now. Let’s just keep in mind these are just suggested, so don’t run with it. They very well could just dress six and its all for not. I certainly am not the end all be all here.

What I do know is I like this teams chances going forward. This team always has a bounce back game after a abysmal effort. I believe that was what we saw in game four, especially in that third period. The Bruins are the deeper team, but does it mean anything right now? The answer is obviously no you still need 4 for the prize.

The Bruins are in a best of three now with the potential of 2 home games. I don’t want a game 7 here do you? I wanna see them come out flying here in game 5 and send a message we won’t be getting bullied around any longer in this series. Let’s Go, Bruins the time is now for you to complete this mission that started with a 7-0 loss against the Caps on opening night. What better way to end the season then winning game 5 and closing things out in St Louis?

That is all Ladies and Gentlemen let’s hope for a positive result tonight from the home team, so we aren’t stress to the tilts Sunday night hoping they can get it back here for game 7.We Want The Cup! Share this article on social media for me !!