Basketball season is finally upon us. After a disappointing season last year, it’s a welcome to have a fresh start. This team will look a lot different than last year, with Kyrie, Al Horford, Marcus Morris, Terry Rozier and others going elsewhere this season.

The Celtics played their first preseason game against Scary Terry and the Hornets. They won the game by 1 point. It’s nice to win, but in the preseason I don’t pay too much attention to the scoreboard as much as the players.

So let’s talk about some things I noticed in the game. Kemba Walker’s debut in a C’s uniform wasn’t spectacular. But we saw just what he can do. He hit a couple 3’s to open the game and did just what he’s done throughout his career. He will be a great addition to this team.

Gordon Hayward injured his elbow sometime in the first half. It doesn’t appear to be serious. We have heard from a bunch of players that Gordon is back to ‘pre-injury’ Hayward. He was cutting and going to the rim. He seems to have that explosiveness back. Granted it’s one game, but I like what I see, and who isn’t rooting for this kid.

Jayson Tatum and Jaylen Brown looked good out there and here’s hoping that these two take the next step this year. Playing for Pop for Team USA is going to help both of them as well. Jayson said he was going to attack the rim more and we saw some of that Sunday.

Robert Williams started at center with Kanter and Poirier coming off the bench. Brad has said about Kanter, â€œWeâ€™re trying to figure out if itâ€™s best with the starting unit or best to bring him off so you can play through him a little more on the block and those type of things, and thatâ€™s probably the case if we continue to start all those guys on the wing.” The interior defense did not look good at all during the game. These guys need to work on interior defense if this team is going anywhere.

Grant Williams showed just how smart of a player he is on the court. He does a little bit of everything and showed he will be a rotational player immediately.

Carson “Buckets” Edwards came in the game and hit two 3-pointers right away. This kid should be able to come off the bench and just light it up. His defense is intriguing too. Imagine a backcourt of Smart and Edwards. Not too many teams will want to see that.

Tremont Waters played a little bit. He wasn’t spectacular but you can see why Danny and Brad like this kid. He’s easy to root for.

Smart did ‘smart’ things! He’s the heart and soul of this team and should be the first Captain under Brad Stevens. Just my opinion though.

I was really only disappointed in one player and that was Semi Ojeleye. He missed too many open shots that he needs to be hitting if he wants to see the floor. I hope in game two he shows up. He had better, or his roster spot may be in jeopardy.

Javonte Green had himself a night. Let’s not get carried away: he was playing against third-stringers and players trying to make a roster. He definitely has crazy athleticism as on most of his buckets he was wide open under the rim. However, pump the brakes on getting out of hand with him. Side note: I do like him myself. If I were Danny (thank God I’m not) I would look at replacing Max Strus with Javonte Green for that 2-way deal. 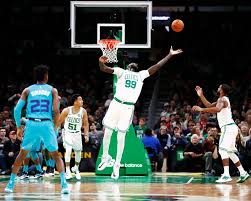 The TD Garden was chanting “We want Tacos!” and when he stood up to check into the game, the place went nuts. He’s already a huge fan favorite. I really hope they find a way to keep him. He came in and right away had a follow up dunk, blocked 2 shots, and obviously made an impact in the paint as the Hornets players didn’t want to go anywhere near him. He’s still pretty raw but for his size he has really good mobility. I have ‘Tacko Fever!’ How about you?

On an end note, the biggest thing I saw come out of this game was how the players were smiling and rooting for each other. Hayward’s smile when he stole the ball and got a layup on the other end was a great sight to see. Whoever was on the bench was rooting heavily for one another. That’s a great sight to see after last year. Its only one game but I like what I saw Sunday.

You can always find me on Twitter here: @JessicaSnee

You can find our latest podcast episode here: https://pod.co/boston-sports-blitz/10-08-19-patriots-throttle-the-redskins-bruins-week-in-review