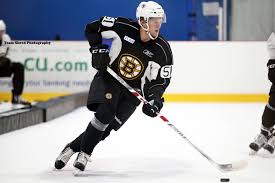 Today is milestone for the 2019-’20 NHL season as Bruins preseason camp is now open. With their first preseason game next Monday, there are many interesting story lines and questions heading into this camp. The contracts of McAvoy & Carlo. The health of a few key veterans that are recovering from injuries. The need to fill the wing on the second line. All are topics of interest and I thought about writing about each of them. Instead, I want to look at prospects.

A couple of days ago, a large sports media outlet (ESPN), put out a list and graded the 31 teams prospect groups. And the Bruins youngsters as a group came in almost last. My problem with this isn’t with the writers assessment of the talent (although I thought the assessment was light in my opinion) but with the measuring stick of grading the groups. Prospects were individually graded as follows.

In many ways I take no issue with the grading system of individuals. My issue is with what’s missing and the surrounding factors at play. If we first look at what farm systems are about, which is propping up the big club, we can then see that the big club’s immediate and near future needs are in play. The Bruins are in a fine spot after coming off a Stanley Cup Final appearance. From their performance (or should I say lack of performance) drafting order is something that’s on the table. If a team is a perpetual cellar dweller, odds are their system is stacked with high draft picks from the past few years. But it also means their big club is in desperate need of change and a talent injection. The B’s have had mid-to- late first round picks over the past few drafts. To add one more aspect into the mix: prospects were only graded if they had less than 26 NHL games last season or 50 in their career. Three Bruins drafted in the past five years were over this mark and are major contributors on the team.

Now in no way am I slamming the the writer. The piece was well written & informative with his assessment of talent. I had almost forgotten that ESPN covered hockey and was glad to see it. But without looking at prospects and their relation to the big club’s needs, ranking these groups means far less. As with many things these days, rankings like this are then picked up by other media outlets and given â€œThe sky is falling!â€ headlines as if to say ‘they won’t be competitive in a few years.’ That’s simply not true.

My assessment of the Bruins overall prospect outlook is that they are in a good, if not great spot. There aren’t too many holes to fill at the moment. There are also prospects in the pipeline with the potential to fill those and any near future aging or injury issues. The goal is to have a championship caliber team and the B’s can be one for some time. I wouldn’t trade that as there’s no trophy for being stacked in prospects and ending the season near the bottom of the NHL standings.

You can find me on Twitter at @stnolan74 along with the rest of our writing team!

Our latest podcast can be found here: https://pod.co/boston-sports-blitz/09-10-19-talking-patriots-demolish-steelers-sign-antonio-brown