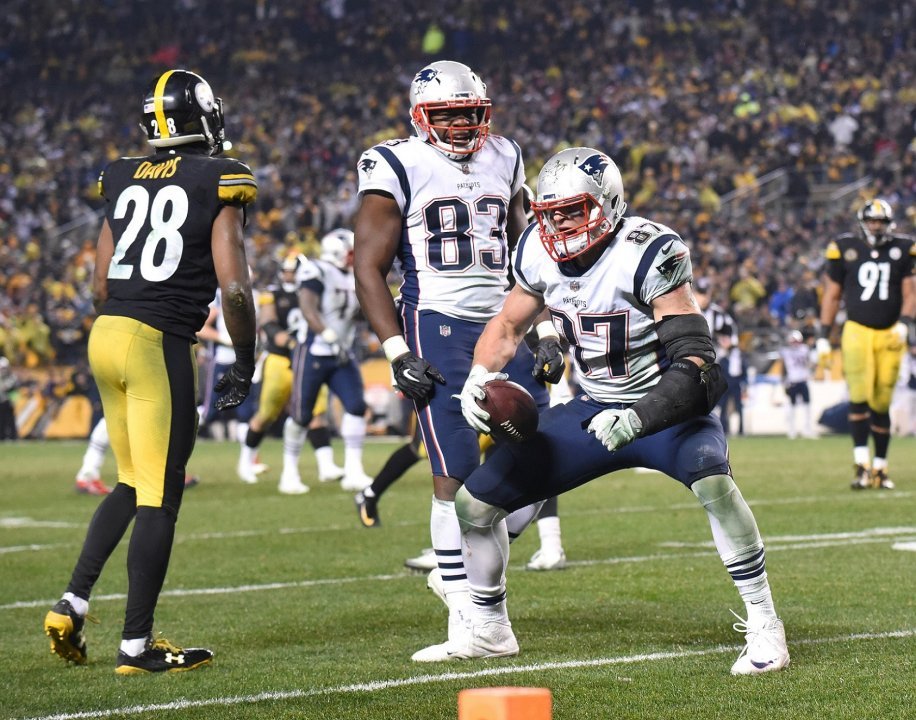 Lunacy. Thatâ€™s all I can think of when I look back at Sundays last second â€œbumbling-stumblingâ€ mess in Miami. Gronkâ€™s befuddling attempt at a game saving tackle symbolized in an image that entire play from coaching to execution to result. The Patriots struggle in Miami. I get that. I didnâ€™t expect an easy victory or a blowout win on our way to a number one see in the AFC and eventual double-digit, blowout Super Bowl victory. I honestly didnâ€™t. I even praised Kenyan Drakeâ€™s skill and commented how I believed the Dolphins were under utilizing their most talented player prior to the game on this blog. But that ending? A loss that way?

I changed the channel prior to the kickoff with hopes that the Baltimore Ravens could do us a solid by beating the Kansas City Chiefs and put the Patriots in position to be the #1 seed in the AFC. If we had won and the Chiefs had lost to both the Ravens on Sunday and the Los Angeles Chargers on Thursday then we would be sitting home at 10-3 with an opportunity to win our way to thee AFCâ€™s #1 seed in a road game against a Pittsburgh Steelers team that we have owned during the Belichick/Brady era. And, not only have we owned them, but we have owned then on the road, in Pittsburgh.

Now, with a loss? Not only can we kiss the top seed goodbye, but we can say hello to a Wild Card weekend home game followed by possibly two road games to Houston and Los Angeles or Kansas City before booking flights to the Super Bowl. Lunacy. Lost opportunity.

The karmac twist of it all is the next opponent after all that has happened in the last week. The Pittsburgh Steelers. We have owned them since Belichick and Brady started dominating the NFL and winning Super Bowl after Super Bowl. We havenâ€™t won them all of course. The Steelers managed to win one during our Dynasty. But, they never went through us to do it and we have beat them, both in Foxborough and Pittsburgh, repeatedly. Every big game resulted in a big Patriots victory and in many cases an all out pummeling.

This week, the Steelers are in desperate straights. They lead their division by a half game over the Baltimore Ravens with the Patriots, the New Orleans Saints on the road and the Cincinnati Bengals left on their schedule. The Ravens face the Tampa Bay Buccaneers at home today, the Chargers in Los Angeles next week and then they finish with a feisty Cleveland Browns team that could have an outside chance at a Wild Card berth in the final week of the season. The Steelers canâ€™t afford to lose and they are due.

The Steelers have been both winning and losing games that they shouldnâ€™t have. They didnâ€™t win or loss any in as stunning a fashion as we did in Miami. There arenâ€™t many losses more perplexing than Sundays â€œbumbling fun under the Miami Sun.â€  But, they beat a Jacksonville Jaguars team when they should have lost and lost to both the Chargers and Oakland Raiders in games when they should have won. And, they sandwiched those stumbles with a loss in Denver to the Broncos in spite of 189 receiving yards from JuJu Smith-Schuster.

The Steelers are due. The history of this rivalry sways heavily in the Patriots favor, but they get a chance for redemption against a New England team that has been Jekyll and Hyde at home and on the road and this week, the Steelers get the Jekyll, who plays significantly worse on the road.

I donâ€™t know how this rolls. I can see the Patriots dominating a franchise that they have owned for over a decade. I can also see a powerhouse Steelers passing game shred a defense that has allowed everyone to put up yards and move the chains.

Both teams have a group of must-start Fantasy players. The fact that both have good matchups, against the other, doesnâ€™t change that. It certainly enhances their potential for more success today than if they were facing stingier defenses, but it doesnâ€™t change whether players like JuJu Smith-Schuster, Antonio Brown, Rob Gronkowski, Sony Michel, James White, Josh Gordon and Julian Edelman are starts or sits. They are all starts.

Here are the Relevant Rankings and Fantasy Points Per Game Allowed by Position.

The impact of these rankings isnâ€™t all that significant. The Steelers have been especially stingy against running backs while both teams have allowed tight ends to score touchdowns. Outside of those two specific circumstances, the matchups donâ€™t suggest that either defense has been especially good or extremely bad in any one area over another.

The Patriots have only allowed 10 total touchdowns to running backs, six rushing and four receiving. Thats a low number compared to most defenses. The Steelers have allowed more receptions and receiving yards to tight ends, but both have allowed the same number of touchdowns to (Seven) – ranking them both 30th in touchdowns allowed.

Here are a few players who are impacted by todays matchup.

The Patriots rank fifth in the NFL in rushing attempts per game (29.4 per game) while the Steelers rank sixth in Fantasy points allowed to running backs.

The Steelers ability to limit running backs should negatively impact Michelâ€™s productivity per touch and his overall volume of touches. The Patriots game plan should be to stretch the Steelers defense in the passing game with more wide receivers and fewer rushing attempts. Add Rex burkhead to the mix and the fact that he is a better pass catcher, and this profiles to be one of Michelâ€™s worst Fantasy games with his lowest volume of touches and targets for the season.

Gameflow is a concern here. The Patriots are likely to try and exploit the Steelers defensive limitations against the pass and if the Steelers score early and often, this game could become a shootout. Las Vegas lines have the over/under at 54, one of the highest totals on todayâ€™s slate. Michel is a start in yearly leagues and a player to fade in DFS.

The Patriots slow linebacking core struggles to defend running backs in the flat and in space and that Samuels skill set. He isnâ€™t much of a runner between the tackles, but he is an above-average pass catcher and has the quickness to gain chunk yards on passing downs and third and long especially. James Connerâ€™s absence only enhances Samuels opportunities for snaps on all downs and rushing attempts.

Samuelâ€™s potential for chunk yards from scrimmage and receptions makes him a strong Flex play in yearly leagues because of this matchup, while the Patriots ability to stop them from scoring in the red zone limits his upside and overall value in DFS. Start him in yearly as a solid Flex play and fade him in DFS where he lacks the ceiling to make an impact in tournaments and head-to-head contests.

Brady has thrown for 283 yards or more in three straight games and four of five. The reason why Brady hasnâ€™t been a Top 10 Fantasy quarterback has been a lack of touchowns and that has a lot to do with Gronkâ€™s injuries and drop in play this season.

Game plan, game flow and the Steelers matchup make Brady a viable Top 10 play today and an affordable risk/reward option in Daily Fantasy. He is priced comparable to Josh Allen and Dak Prescott in a favorable matchup and a game that could be a shootout. I like the risk in DFS today.

I have been preaching that Gronk is always a start in yearly and a sit in Daily. That changed last week. I recommended sitting him in my posting and used him once I finalized my lineups at game time.

Gronkâ€™s play has suffered to the point where his price has become affordable in and the matchup is one that should result in 70 receiving yards with a high-percentage chance of at least one touchdown. I bought into Gronk in DFS last week and I am recommending him in this matchup today.

The Patriots rank 30th in touchdowns allowed to tight ends with seven and when targeting a tight end, that is the stat we care about. There arenâ€™t many standouts at the position, so the likelihood of a touchdown weighs heavily when deciding who to start or sit. The fact that McDonald is extremely cheap enhances his value. Start him in yearly and own him EVERYWHERE in DFS. Bargain price with TD potential today.

Good Luck in your Fantasy Championships and cashing in Daily Fantasy Sports. Tweet me when Need Be People.

You can follow me on Twitter @CJMitch73 or participate in my Facebook groups â€œThe RotoExperts Fantasy Sports Showâ€ or â€œA Podcast To Be Named Later.â€  My weekly Fantasy Sports Column appears at RotoExperts.com and my bi-weekly content about Major League Baseball can be found at MinorLeagueBall.com.

My Weekly Fantasy Football Column is at www.Rotoexperts.com.