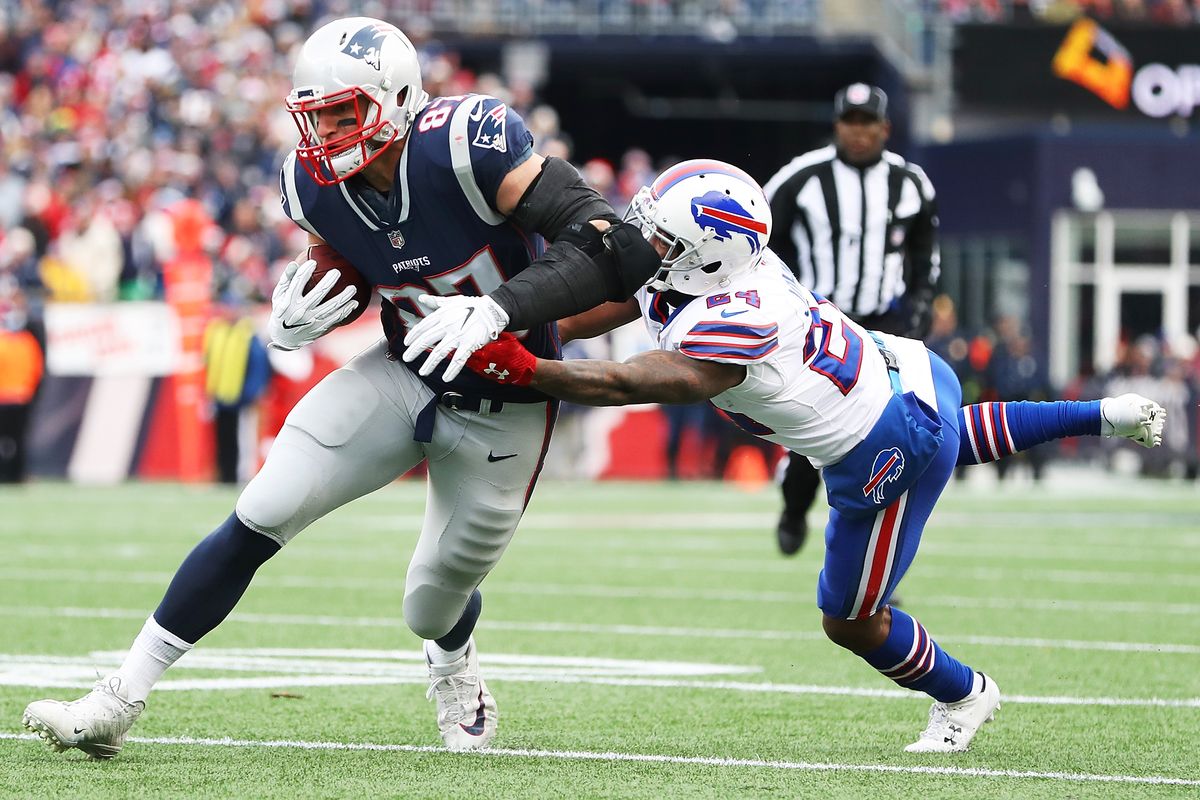 This is a game that could be explosive, or ugly, depending on who you root for and what you like to watch on Sundays/Mondays. The Patriots offense has been explosive in recent weeks while the Bills defense has been one of the best in yards allowed and especially passing yards allowed. A factor that could upend the Bills ability to hold down the Patriots powerful passing attack is the futility of their offense. They have struggled to move the ball, maintain drives and score points, especially through the air.

If the Bills offense canâ€™t control time of possession then, like any defense would, it will be exposed and the Patriots will put up a lot of Fantasy points, regardless of how good their defense has been this season. Â Â Â

Here is how the Patriots rank in key Offensive categories:

Here is how the Bills rank in key Defensive categories:

The Patriots Offense vs. The Bills Defense

The Bills defense has been one of the best in football in total yards allowed and against the pass, while they have struggled to stop the run. This would have been a perfect matchup for the Patriots and their dedication to the running game with Sony Michel this season. Unfortunately, itâ€™s unlikely Michel plays after injuring his knee in week seven and they donâ€™t have a quality replacement to fill the hole that Michelâ€™s absence creates. Kenjon Barner and James White have proven that they canâ€™t fill Michelâ€™s shoes running the ball between the tackles, making week eight likely to be a pass-heavy game plan for the Patriots and a heavy target day for their receivers.

With Sony Michel unlikely to play due to his knee injury and lack of a viable alternative rusher between the tackles, the Patriots are likely to be forced to play into the strength of the Bills defense, which is stop the pass. Their defense ranks fourth best overall in total yards allowed and fourth best in passing yards allowed. The pass-heavy game plan will help certain players, while it will pose a challenge for others due to the strength of the Bills pass defense.

The Bills pass defense is one of their teams strengths, but with Sony Michel likely out and the Bills offense likely to provide a lot of possessions for the Patriots offense, I expect a big day for TB12.

The statistics suggest that this could be a difficult matchup for Brady and his receivers, and one that Fantasy owners may want to avoid. But, game flow, game plan and the futility of the Bills offense leads me to believe that the Patriots are going to have a lot of possessions and good field position that will result in a lot of passing yards and passing touchdowns. That means Tom Brady is in for a big Fantasy week. Â

300+ passing yards and four or five touchdowns is not outside the realm of possibility because of game flow. The Patriots have owned the Bills and this week shouldnâ€™t be any different. Brady is a must-start in yearly leagues and a potential bargain in Daily Fantasy as a top tier performer at a second or third tier price tag.

The more the Patriots game plan focuses on the passing attack the more impactful James White will be for Fantasy owners. With Michel likely out and the Bills run defense ranking ninth worst in rushing touchdowns allowed, White has a chance to be a high-target performer between the 20â€™s in the passing game and a legitimate rushing touchdown threat in the red zone. He is the Patriots most reliable Fantasy player and a great Daily Fantasy target in a friendly matchup this week.

Owners should expect 125-150 total yards from scrimmage, 7-10 receptions and at least one touchdown. I think he scores two, but I donâ€™t want to get ahead of my skiâ€™s while the high of a Red Sox World Series win Saturday Night is still running through me.

Edelman lives and dies on targets and receptions more than total yards or touchdowns, so the increased focus of the offensive attack should help his owners this week.

Heâ€™s been relatively pedestrian with his receiving yards and receptions, with seven, four and five receptions respectively, but he has been targeted nine, seven and eight times in his three games. And, he touchdowns in back-to-back weeks.

Expected targets and receptions make him a must-start, low-end WR2 in yearly leagues, while the difficulty of the matchup minimize his value in Daily Fantasy formats.

Gordon was targeted nine times against the Kansas City Chiefs in week six and seven times against the Chicago Bears last week in his first 100 yard receiving game as a Patriot. He is becoming a more significant part of the passing attack and a more popular target for Tom Brady.

Even with his new found popularity and cinergy with TB12, the Bills arenâ€™t the best matchup to be looking to get well with in Daily Fantasy. Donâ€™t spend your budgetary dollars in DFS on Gordon, but make sure he is in your yearly league lineups.

Hogans had 78 and 63 receiving yards in back-to-back weeks. If this was a better matchup or he was scoring touchdowns, I would be in favor of starting him in your Flex spot, but neither is the case. The Bills are good against the pass and Hogan hasnâ€™t found the end zone since week two. Add Josh Gordonâ€™s emergence to the mix and Hogan is falling further and further down the priority list and less and less viable in any Fantasy format.

As I said in last weeks column, if heâ€™s breathing and heâ€™s playing, heâ€™s starting for Fantasy owners. Thatâ€™s Gronk being Gronk. And like Gronk, he is too expensive in Daily Fantasy to be of value.

The additional passing attempts in the game plan this week enhances his potential for a big week, while his continued back issues make him a more and more risky DFS play at the big dollars that he costs. Run him out there in yearly leagues, spend elsewhere in DFS.

The Patriots defense is tied for fourth in interceptions (4) while the Bills offense is a league worst in throwing them with 12. The Bills also rank worst in Fantasy points allowed to opposing defenses with 14.1 per game.

The Patriots rank second worst in sacks, but with their ballhawking of interceptions this season and the likelihood that the Bills throw a few, they should rack up some points and maybe a defensive or special teams touchdown this week. The Patriots wonâ€™t be the most expensive Daily Fantasy defense, but they have a chance to be one of the best in a good matchup this week.

The Bills Offense vs. The Patriots Defense

The Bills offense has been awful. Itâ€™s dragging down an otherwise strong defense and making them one of the leaders as we get closer and closer to the home stretch in the race for the number one overall pick in the 2019 NFL draft. Injuries have Derek Anderson starting at quarterback and LeSean McCoy questionable after being in the concussion protocol all week, but that doesnâ€™t explain the futility, Â

Here is how the Bills rank in key Offensive categories:

The Bills donâ€™t throw the ball all that often (ranking 30th in passing attempts per game) and when they do they rarely score touchdowns or result in many yards (they rank dead last in passing touchdowns and passing yards) and when they do complete a pass, too many of them are to the opposing defense rather than their own receivers, resulting in a league worst 12 interceptions.

The Patriots defense has been a good matchup for offenses, allowing 24, 40 and 31 points respectively in their last three games. They donâ€™t get pressure on the quarterback and they struggle against quarterbacks rushing the ball, shown by Mitchell Trubiskyâ€™s 81 rushing yards in week seven. The problem, explained above and by the statistics, is that the Buffalo Bills donâ€™t have the personnel or the quarterback to exploit the matchup to the benefit of Fantasy owners.

Here is how the Patriots rank in key Defensive categories:

Tied for 4th in Interceptions (10)

McCoy remained in the concussion protocol for Saturdays practice, but by all accounts he will suit up for the Monday Night matchup on ESPN. With his injury being a concussion, itâ€™s unlikely that if he suits up that it will diminish his production and this is a game that he can be a Fantasy factor.

The Patriots allow 114 rushing yards per game on the ground and have allowed an average of 25.6 points per game to opposing offenses. McCoy is a strong Flex option in yearly leagues and a player to avoid in DFS.

The one thing the Patriots defense does well is prevent rushing touchdowns and McCoy isnâ€™t a legitimate red zone threat even in the best of matchups. He only rushed for six touchdowns in 2017 and he has yet to score a touchdown, rushing or receiving, this season.

This is a game that rookie Josh Allen, with his big arm and early season rushing prowess could have been a discounted bargain with upside, but injuries provide Derek Anderson an opportunity under center this week. Kelvin Benjamin is the lone potential starter from the passing attack, but their futility is too overwhelming to look passed their issues and attempt to exploit the Patriots underwhelming defense.

The Patriots have dominated the NFL in general, the AFC East in particular, and the Buffalo Bills even more specifically, during the Tom Brady era. He has more victories against the Buffalo Bills than any quarterback against any other team in NFL history. He is 28-3 against the Bills and 14-2 on the road in Buffalo.

This is a week where the matchup isnâ€™t ideal for Fantasy owners that have Patriot players, but the game plan should allow them to exceed their season averages as an offense with the potential for another 35+ point game and an easy victory. Tom Brady should have a 300+ yard passing game with three or four scores, while James White should once again be one of the stars of the game with two touchdowns himself. Look for Gronk to score early in the game and probably sit as they salt it away in the fourth quarter, limiting his targets and overall production for the day. Josh Gordon is the wild card. His role is growing as are his targets, receptions and receiving yards. This could be the week he scores a few as well. With 35-45 expected points, someone has to be on the receiving end of those scores and this could be Gordonâ€™s best game of the season.

You can Follow me on Twitter @CJMitch73 for links to my Podcasts, â€œThe RotoExperts Fantasy Sports Showâ€ and â€œA Podcast To Be Named Later,â€ and you can read my Baseball and Fantasy Sports Content at MinorLeagueBall.com and RotoExperts.com.