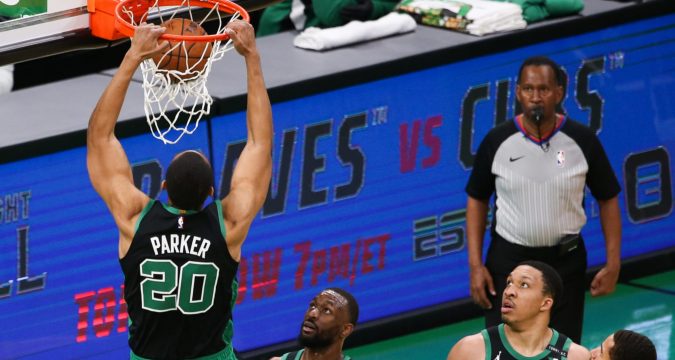 By now Celtics fans have checked out all the old YouTube videos on the team’s latest acquisition, Jabari Parker. You may have already seen him play his first game. How did this guy end up here? We will get to that. Jabari was a Chicago legend. Jabari rose to fame in Chicago following the footsteps of his idol, Derrick Rose and in many respects in the shadow of his Dad, that played pro ball for Golden State. In 1990 his Dad established the non-profit Sonny Parker Youth Foundation (SPYF) in his hometown of Chicago. Designed to provide year-round educational, recreational, and multi-cultural programs for inner-city children. Basketball was in Jabari’s blood. He attended the same High School that Derrick Rose attended. Derrick was Jabari’s role model. They have a little bit in common. The same south-side Chicago neighborhood and HS. Both were sought after recruits; Derrick went #1 overall in 2008. Jabari was a one-and-done at Duke. Jabari Parker was drafted by the Bucks in 2014 class. Here are the top 7 picks of that draft class.
1) Wiggins
2) Parker
3) Embiid
4) Gordon
5) Exum
6) Smart
7) Randle

Look at those names. These guys aren’t washed up, these guys aren’t old. Jabari is only 26, and if you look at the list, these guys shouldn’t be defined by their first few years in the NBA. Some of these names should be very familiar. Incidentally Nikola Jokic was taken in the same draft with the 41st overall pick.

I think we can all agree that Parker probably isn’t that same recruit or even the #2 overall pick. However, he is still an NBA-quality player. But, if he is still a valuable piece, what happened? With a short answer; bad luck! Originally drafted by the Bucks, he injured an ACL. After struggling to get back into the rotation and finally filling some of the promise he had, he re-injured the same ACL. This time when he finally came back from the injury, the Bucks had already decided to head down the Giannis road and center the offense around him. So the Bucks moved him to Chicago. Chicago was thrilled to have their hometown kid come back and rep the city. Well, at least for a little while. Jabari was off to a good start with Chicago, but they soon had a coaching change, and Bobby Portis returned to the line-up. New Coach Jim Boylen mysteriously dropped Parker from the rotation. Boylen played him in just one of thirteen games before having him sent off to the Wizards. Then he was off to Washington where he appeared in 38 games. Then to Atlanta where he appeared in a total of 23 games. Finally it was off to Sacramento, who decided to cut him after only 9 games. By all reports it wasn’t that he wasn’t contributing. He was fighting for minutes, and when he got them he was producing pretty solid numbers. In short, Jabari was a victim of hype and expectations. When you are that highly coveted coming out of college, it can be hard if you start with injuries. Teams started focusing on what he can’t do, rather than his still substantial up-side. He is slower, he can’t fly above the rim, he can’t defend.

Do You Remember Evan Turner?

Many of you probably remember Danny taking a flyer on a former #2 overall pick named Evan Turner. Maybe this guy should get the same chance. What does this guy bring? Scoring! It is that simple, he is a big body that can score the basketball. He isn’t going to be confused with a defensive stopper, in any way, shape, or form. But the opposition needs to account for him. They must respect him, and currently they don’t have to respect any scorers off the Boston bench. The addition of Parker and Fournier solidify a much more capable rotation going into playoff time.

Brad and Danny have taken plenty of heat about rotations and personnel on the bench, but I think most of those voices are quieting now. At least, for a while. The team is finally looking like the team we all expected coming out of the bubble performance.