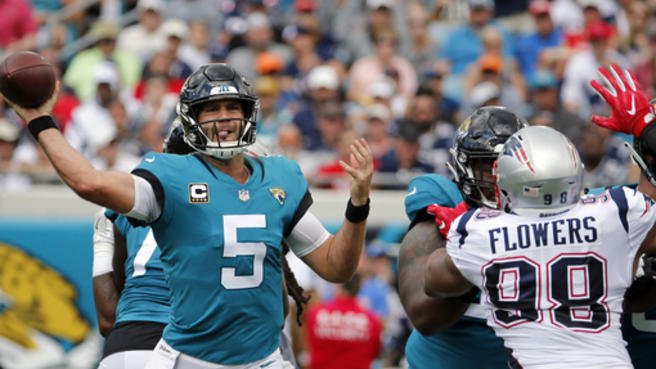 Sound familiar? That is the theme again after the Patriotsâ€™ putrid display in Jacksonville today. Let’s call a spade a spade. They got outplayed in all facets of the game. What can be taken away from this? Â I’ll try and get into that now.

Forget about it: Simple and right to the point. The Patriots didn’t show up today – it is as simple as that. I don’t wanna hit that panic button yet as it is still week 2,but that was an ugly display by them. What side of the football is to blame for this outcome? I think I should break both sides down in what promises to be rather ugly. Here goes.

Defense: What is going on here? The defense for the most part got zero pressure on Bortles today. Bortles was 29-45 for 377 yards with 4 TDs. Does that not make you sick? Â Once again the Patriots defense was terrible on 3rd down, a trend that has to stop immediately. The rush defense wasn’t much better, giving up 104 yards. Better than last week, but still not good enough. The secondary in this game got torched badly. They had no answer for Keelan Cole (7 receptions for 116yds and a TD).Â  Overall just a pathetic display from them.Â  If I was grading them here – Iâ€™d give them an F.

Offense: What happened today out there? Â I’ll tell you what – Brady was under constant pressure to begin with.Â  I think some of you might have read my article earlier in the day about 5 Patriots players to watch for.Â  Remember LaAdrian Waddle ? Â Come on man. You can’t allow Fowler to beat you clean like that, not with your team in position for points. The line overall was not good but it is something they have time to fix. Brady for the most part did what he could – 24-35 for 234 yards with 2 TDs. I don’t think they were terrible, but they could have performed better on 3rd down. When you don’t execute on 3rd down you can expect a long day at the office.Â  I hope they can figure this out before it becomes a real problem.

Conclusion: What can I say? The Patriots just came out flat and never recovered. The Jaguars won a week 2 tilt that means a hell of a lot more to them than the Patriots in my estimation. They need to forget about this game and remember the Patriots Mantra – â€œWe’re on to Detroitâ€.