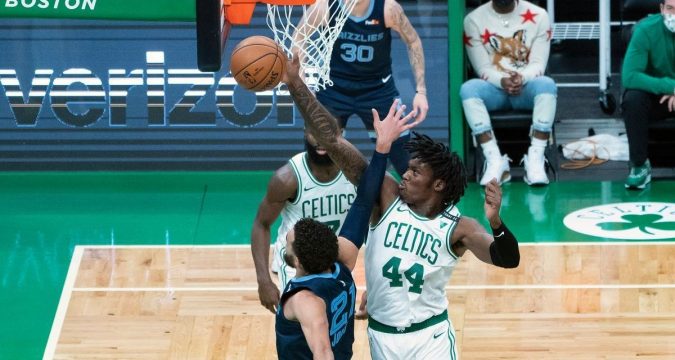 What is a Timelord? The Time Lords are an ancient race of extraterrestrial people in the British series television series “Doctor Who” The main character was a Doctor was a Timelord. Time Lords can time travel using technology and they had a non-linear perception of time.

Well, I’m sure that is wonderful information, but what does it have to do with Robert Williams? Like many things these days, it finds its roots in social media. More specifically a place known as “Weird Celtics Twitter.”
The nickname stems from conversations between Twitter users the Riffs Man (@HerbertofRiffs) and Brian Schroeder (@Cosmis) that started well before Williams was selected by the Celtics with the 27th pick of the NBA Draft. Schroder, who scouts prospects, told “Riffs Man” about this kid out of Texas A&M, which later evolved into a joke that maybe Danny Ainge would draft him. Turns out Williams fell to a point that Ainge had to take a chance.

Why Williams In The Draft

Williams fell in the draft partly because there were questions about his health and about his seriousness about putting in the work. As it so happened the questions about his work ethic immediately came into question. The day after being picked by the Celtics, Williams overslept and missed his introductory press conference call. Then he missed his flight and first day of Celtics practice with the team. Of course, local media went crazy. The Timelord nickname was not so much about Williams but making fun of the media reaction to Robert’s start with the team. Brian Schroeder called him Timelord and turned him into “Dr Who’s” Timelord, where the explanation for why he is often late, and predicted his coming is that he’s trans-navigating multiple timelines. Others picked up the nickname and concluded that the Timelord sees blocks before they happen, and that time stops for everyone else when he goes up for a block or lob.

How he has played so far this season?

Out of the gate Rob showed that he was a crazy-gifted athlete, but there were still concerns about his health and his work. He was often lost on rotations, out of position or would jump at the slightest head fake. None of that is a surprise, you don’t draft a raw big at 27 without expecting a learning curve. We as fans, want to see our pick getting minutes right away. Let’s throw him out there to see what we got. Thankfully, Brad didn’t do that. He gave him spot minutes in games, but most of his growth has come in practice and off the court. Many fans hated this process, they claim Brad doesn’t develop players. He doesn’t give them a chance. Well, this year’s version of Robert Williams is a product of patience. I grow so tired of the calls for a “real center” and that a 6’8” guy can’t play the 5 or protect the rim. Literally, that is what Rob has done. He blocks and alters shots and throws down lobs. In addition to rim-running, he is proving to be a good passer. Next on his list should be a 12 to 14-footer. Robert has been putting up good numbers for the amount of time he is playing. His role has been slow to grow, but for bigs, it usually is. Going into this season Robert said there would be a big jump (pun intended) in his play and he hasn’t disappointed. Watching the national broadcasts of the Celtics this year I have noticed many announcers commenting on Robert’s evolution. He makes a positive impact as soon as he checks in.

Could Ainge Trade Him?

Now, the question Celtics fans don’t even want to contemplate. Is he a valuable piece of the Celtics going forward, or is he an asset that can be moved to get you a prize now?