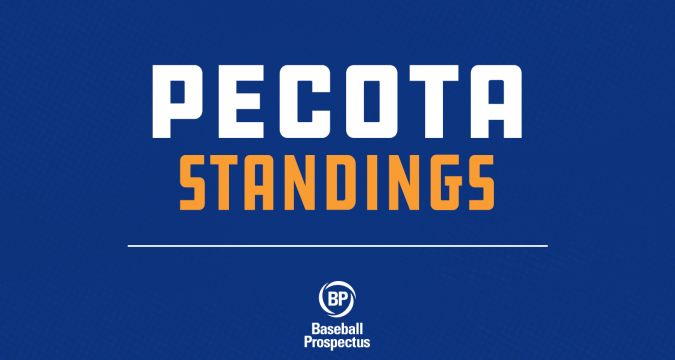 With the Red Sox ready to kick off the preseason season on Sunday, it’s that time of the year when PECOTA releases their predictions for each team in the upcoming season. For those unfamiliar, here’s a quick breakdown of PECOTA projections from MLB.com that describes it pretty simply:

“Every year, PECOTA forecasts the MLB standings and individual player performance. PECOTA takes teams’ depth charts and projects the playing time and stats for all their players, then simulates the season to come up with estimated win totals and playoff chances for every team.”

With that in mind, you have to understand this is a projection run on a computer. Some teams may have a total number of projected wins that seem very high and some teams will have a number that seems very low. There are actually quite a few in the list that I scratch my head at and wonder how they came up with the number that they did. Plus, there is no computer in the world that can account for all the intangibles and oddities that come along with the game of baseball, which is what, in my opinion, makes this game the best of any professional sport. Nonetheless, I still would like to take a look at PECOTA’s projection for the Red Sox in 2021, since my most recent post was about why I’m excited for this year’s team. That being said, PECOTA has the Red Sox finishing 80-82, with a 1.8% chance of winning the division. That win total would be the 12th worst record in all of the major leagues, only ahead of the Orioles, Royals, Tigers, Mariners, Rangers, Marlins, Reds, Pirates, Diamondbacks, Giants, and Rockies.

So first let’s focus on our division, the AL East. The Orioles are just not a good baseball team. They have a couple of prospects that are high on the MLB top 100 list, but they’ve been in rebuild for quite some time and have not show any signs of winning being a priority right now. Then there’s the Rays. They’re never a team that wows you on paper, but somehow always play the Sox hard and battle back and forth all year long. But the Rays are coming off a loss in the World Series, and lost two starting pitchers that carried them there, in Blake Snell and Charlie Morton. Behind Tyler Glasnow, there’s 3-4 guys (Archer, Wacha, Hill, and McHugh) that were once reliable starters but are years removed from that. IF those guys find their old form, the Rays will be good. But if those guys can’t find it, Red Sox fans all experienced in 2020 what it’s like to have a rotation full of guys you CANT count on to go out and give you a chance to win everyday. Which brings me to the Yankees, who are in an eerily similar situation. Behind Cole, there’s Kluber who hasn’t even thrown many pitches in the last 2 seasons due to injury. Taillon, who was traded from Pittsburgh, also hasn’t pitched much and is coming of his SECOND Tommy John surgery. Montgomery and Garcia who were just alright last year. Then they’ll get Severino back at some point, who’s also coming back from TJ. Then there’s German who’s in a lot of trouble off the field, so there’s no guarantee he’ll even be on the team at the start of the season. Again, if all those guys behind Cole can find a groove and pitch well, the Yankees will be good. Both the Yankees and Rays have solid projected lineups, but we know all too well that a team without a solid rotation 1-5 will not win a lot of games.

What about our Red Sox? Well… we’re kind of in the same boat as the Rays and Yankees. You see, despite an unbearable rotation in 2020, the Red Sox offense did not struggle at all. Even with a down year from JD Martinez, the Red Sox offense ranked at the top of the AL. And I believe that lineup got slightly better, at least offensively, in 2021. So scoring runs won’t be an issue for the Red Sox this year. But our rotation has a lot of question marks. Are we getting Eduardo Rodriguez back at 100% with a clean bill of health, like we saw in 2019? Or is he going to be on and off the IL this year? Nate Eovaldi is another guy, who when healthy, I’m very comfortable giving the ball to. But health is at least a concern when it comes to him. Garrett Richards also is a guy who can be phenomenal, but has been plagued by injuries throughout his career. If we get a full healthy season from him, he’ll be fun to watch; but there’s no guarantee he can stay in the rotation for a full season either. Martin Perez is a big league pitcher, and if he doesn’t have to be as heavily relied on as he was in 2020 and the aforementioned guys all stay on the field, he’ll be a solid 4th man in the rotation. The fifth slot is going to be up for grabs between Nick Pivetta, Matt Andriese, and Tanner Houck. It may be likely that Houck starts in AAA, despite a great 3 starts at the close of 2020. And I see Andriese as a better fit in the bullpen. So assuming it’s Pivetta, whose best season saw him start 32 games with a 4.77 ERA and a 7-14 record in 2018 on a Phillies team, who ironically finished the season at 80-82…weird. However Pivetta is only 28 years old, and maybe a change of scenery helps him find what’s been missing in his short career. Then there’s the return of Chris Sale at about the halfway point. IF Chris Sale is 100% healthy and his arm is no longer a concern, he’s a top 5 pitcher in all of baseball, hands down. But since the Sox extended his contract, we’ve actually seen very little of Chris Sale because of how frequently his arm HAS been a problem. Now is it likely that ALL of those guys all stay healthy for a full 162 and can find the best versions of themselves in 2021? No. But if 3, maybe 4 do, that’s a great rotation. If ALL were to have a perfect world scenario in 2021, that rotations a contender with the best in all of baseball.

So to the last team in the division, the Toronto Blue Jays. PECOTA only has their win total at 84.7, which to me sounds low. The blue jays offense is SCARY on paper. And it’s a very deep roster too. The infield will be filled out in many ways between Bichette, Vlad Jr., Semien, Biggio, Panik, and Tellez. The outfield will be manned by Springer, Gurriel, Grichuk, and Hernandez. Jansen will see a majority of the time behind the dish, though he’s not known for his bat. Aside from the catchers position in the order, EVERY single position is filled by a guy who is NOT someone I’d say as a pitcher “yeah I want to face that guy.” The scary thing is that out of the guys I just mentioned, only 9 can be in the lineup at a time, so their depth is legit. But their rotation is where I’m not sold. Ryu and Pearson are good, but aside from them there’s Robbie Ray, Steven Matz, Tanner Roark, and Ross Stripling. They do have some young guys who are pretty close to ready so Matz, Roark, and Stripling could wind up in the pen if they can’t crack it in the rotation, and the Jays elect to see what they have in the kids.

As far as I’m concerned, the AL East will be won by the team that has the most things go right in its starting rotation, because each of the teams’ rotations have lots of question marks. The offenses for the Red Sox, Rays, Yankees, and Blue Jays are all going to MASH, barring any major injury or covid setbacks.

Aside from the White Sox, and maybe the Twins and the Astros, there is not an American League team outside our division that I think is better than the Red Sox on paper. Where things get tricky is the setup of interleague play in 2021. AL East teams will play NL East teams. So the Red Sox will have a decent chunk of games against the Mets, Braves, and Nationals. All of whom I currently believe to be better teams on paper than Boston, top to bottom. The Phillies aren’t quite on that level yet in my mind, but they’re not going to be locks for a win either. The Marlins snuck into the playoffs last year and have a lot of exciting young talent ready to let lose, so even those games should be wins but won’t be easy ones. So for the Red Sox to win the AL East, they not only have to win a lot of games against division rivals, but they’ll also have to outperform those same division rivals in interleague play against some good baseball teams

Now for those of you who are still stuck on 2020, believe me when I say that last year hurt me immensely. I still haven’t forgiven the front office for the starting pitching they trotted out onto the field each day. It was painful to watch and it wasn’t right to put the fans through that when baseball was one of the first bits of a return to normalcy in the midst of a global pandemic. We as members of Red Sox Nation can handle losses, but we can’t accept not even trying to show that you want to win games. And with the rotation they rolled out in that shortened season, you cannot tell me they were prioritizing winning baseball games. So yes, if you decided to read through the entirety of my optimistic outlook on the new season, and you think I’m out of my mind, I don’t blame you for feeling that way. All I’m saying is it would require some things to work in our favor, for sure, but PECOTA’s 1.8% chance of winning the division in 2021 is absolutely blasphemous to me.

If I were a betting man, I’d hammer the over on the projected win total of 80. My guess is the Red Sox would finish with closer to 90 wins, but in a perfect world it’d be more like 95. Just don’t count these guys out yet. I could be wrong, sure, but I think 2020 hurt you guys too much as fans. Give this group a shot, I think you might like what you see.

Please follow me on Twitter, @MikeyT913, and feel free to reach out with any questions or topics you’d like discussed as we near spring training games and the start of a new season…let’s go Red Sox!

Cover Photo and Images from PECOTA Standings as of 02/15/2021 on BaseballProspectus.com