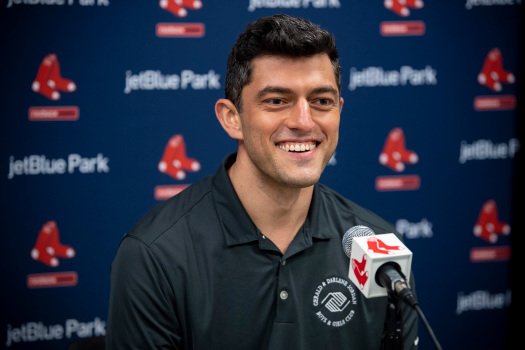 It’s been a while since I’ve written anything positive, or anything at all, about the Red Sox. Partly because they were nearly unwatchable in 2020, and partly because there was nothing positive for me to say about them. But it’s 2021, baseball is back, the Red Sox look a lot different than they did last season, and the Chaim Bloom era is underway.

Speaking of Bloom, I want to start there. 2020 for me was a wash in terms of evaluating Chaim. He took this position knowing he would have to trade a generational talent in Mookie Betts, which quite obviously wouldn’t be received well by Red Sox Nation. But now that the dust has settled, we can really start to see his plans coming to fruition. While we’re still on the topic of the Betts trade, the centerpiece that came back to Boston, Alex Verdugo, is set to begin his first ‘full’ season. Though Verdugo is not the same player as Mookie Betts, I strongly believe in his talent and upside. Yes, he has known back issues, but if he can stay on the field in 2021, I think a lot of the pessimistic fans will come around quickly when they see what this guy is capable of. Verdugo is also due for a contract extension, which could happen as soon as the start of the season.

Contract extensions bring me to my next point. Eduardo Rodriguez was coming off his best season in 2019 until his health scare and Covid complications, but he is also eligible to be extended, and is just starting to creep into his prime years. The Sox could be in wait and see mode with Eddy and want to see that he’s healthy before they offer him a long term deal. Then aside from the aforementioned Verdugo, Bogaerts and Devers are also eligible. Now we can’t assume they’ll all be extended prior to the season, but a core of Verdugo, Bogaerts, Devers, and Rodriguez is something I’d be very excited about looking forward, well past just the 2021 season.

The next reason I’m excited is the return of proven talent. J.D. Martinez is back and there is just no way he can have a worse season than he did in 2020. He’s another guy I’d like to consider the 2020 season as a wash. The Sox were brutal, the shortened season was weird for everyone; and because the season was so short, it was very easy to have misleading numbers at the plate if you fell into a slump. Now that 2021 is set to be a full season, or as close to one that the league is able to have, I think we’ll see Martinez numbers at the plate go back to what we’re used to seeing from him in the middle of the order. And, though he won’t be ready for the start of the season, Chris Sale is already throwing, and if he’s fully healthy when he returns, we all know how dominant he can be and how happy the team will be to welcome him back to its rotation…especially because that same rotation was legitimately pitiful in 2020.

Speaking of that horrendous 2020 rotation…. fast forward to 2021, and assuming all stay healthy, we’re looking at starting the year with Eduardo Rodriguez, Nathan Eovaldi, Martin Perez, and Garrett Richards. Chris Sale should return to that mix about halfway through the 2021 campaign, but until he’s ready, a handful of guys will be battling for that final rotation spot. There’s Nick Pivetta who’s only 28 years old, and though he hasn’t yet been able to put it all together in his young career, the front office seems to be very high on this guy who came over in the return for Workman and Hembree being sent to the Phillies. Then there’s Matt Andriese, who also is looking to put it all together, but can at least give you guaranteed big league innings. And there’s Tanner Houck, who had a great three starts at the end of 2020, which was a very promising sight after a dumpster fire of a season from the starting rotation.

The Sox also upgraded the back end of their bullpen which was a necessity. We’ll really get a good idea of Darwinzon Hernandez’s progress when he sees some high leverage innings when the Sox are actually competitive. I like the Adam Ottavino move, because 2020 was a fluke year statistically for a guy who’s been pretty dominant in late innings in recent years. Matt Barnes and Ryan Brasier are returning. The newly acquired Hirokazu Sawamura is a bit of an unknown at the moment, but comes with very high praise from the Nippon Professional Baseball league in Japan. And then there’s some younger guys looking to make a name for themselves. In addition, Andriese, Pivetta, and Houck could all move to the pen, should they not win the final spot in the rotation.

Another thing I’m excited for is the flexibility the Sox have with their lineup. Devers is a lock at 3rd, Xander is a lock at short, Vasquez is a lock behind the plate, and Verdugo is a lock in center/right field, depending on how Cora wants his outfield to look. Aside from that, the rest of the guys are all utility men and can play in many positions. Franchy Cordero, acquired in the Benintendi deal, can play both corner outfield positions, and when healthy, has shown tremendous pop at the plate. Hunter Renfroe is also another corner outfielder, who’s looking to bounce back at the plate after a rough 122 AB’s in a short 2020. Enrique Hernandez, signed this offseason, looks to be the starting second baseman but can also play some corner outfield as well. He’ll also give the Sox a much-needed spark offensively and on the bases. Marwin Gonzalez can also play some second and corner outfield, but will probably be used heavily as a left-handed hitting platoon option at 1st base, splitting time with Bobby Dalbec. And then there’s Michael Chavis, who’s played some 1st and 2nd base at the big league level, but needs to have a solid year at the plate if he wants to stay in the mix. Some depth guys in Christian Arroyo, Yairo Munoz, and Jonathan Arauz that can all bounce around a bit as well, and give Cora even more options off the bench.

And to my final point, what many believe the main reason the Sox brought Chaim to Boston, is to fix the problem of our young talent in the farm system. To begin with the guy I’m highest on, Jeter Downs, though he may not get the call in 2021, I firmly believe he is going to be the Red Sox 2nd baseman for years to come. Be patient, I think he’ll be more than worth the wait. Then there’s Bobby Dalbec. He’s had a sniff of the Major Leagues, but as things stand, he should see a solid amount of time at 1st for the Sox this year, and should also hit a decent amount of baseballs over the Green Monster in left field. Tanner Houck showed some promise in three starts at the end of 2021, and will have a legitimate shot at the 5th spot in the rotation, at least until Sale returns. Regardless of whether he starts the year in AAA, it’s great to know we have someone reliable should the Sox run into injuries or Covid cases. Some other noteable arms that may still be a year or 2 out are Connor Seabold, Noah Song, Jay Groome, Garrett Whitlock, and Bryan Mata. Then there’s a pair of outfielders to be excited about in Gilberto Jimenez and Jarren Durran. I do believe Durran will get the call first, and when he’s ready, fans better be ready too, because he will be the everyday centerfielder for years to come. Connor Wong, also acquired in the Betts trade with Verdugo and Downs, could see some time as Vasquez’s backup in 2021, though I do see him as a guy who may still be a couple years away if Kevin Plawecki is still in the picture for 2021. A couple more infielders in Blaze Jordan and Triston Casas who won’t get the call in 2021, but are names you should be very aware of. And then there’s still the unknown return in the ‘Players to be Named Later’ from the trade that sent Benintendi to Kansas City. The fact that Bloom still hasn’t selected those players leads me to believe they’ll at least be more significant than not.

Look, I’m not saying the Sox are World Series favorites here. What I am saying is wipe 2020 from your brain, show some faith in Chaim, and be excited that Alex Cora is back with this group. There are many things for Red Sox Nation to be looking forward to. The O’s are going to O’s again. The Rays lost some BIG names so it’s unsure where they stand in the division for 2021. The Blue Jays made a flurry of expensive moves this offseason and have a great young core to go with it, but I’m not ready to hand them the division just yet. And the Yankees have a great lineup when everyone’s healthy, but aside from Cole, their starting rotation has a LOT of question marks as things currently stand. It’s not at all crazy to be be rooting for Boston to secure a Wild Card spot and sneak into the playoffs, but if things go well with this new group of guys and some crazy things happen elsewhere in the division, who knows what could happen. Just don’t count these guys out yet, I’m excited for some real baseball to return to Boston in 2021, and hopefully some fans will be let into Fenway to experience it firsthand!

Please reach out on Twitter, @MikeyT913, with any questions or topics you’d like discussed as we near the start of a new season…let’s go Sox!